Lockwood and Co by Jonathan Stroud 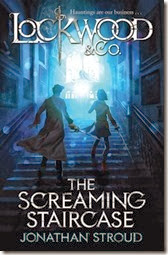 Of the first few haunting I investigated with Lockwood and Co. I intend to say little, in part to protect the identity of the victims, in part because of the gruesome nature of the incidents, but mainly because, in a variety of ingenious ways, we succeeded in cocking them all up. There, I’ve admitted it!
Published in August 2013 by Doubleday, an imprint of Random House
Pages – 440
Book Summary
When the dead come back to haunt the living, Lockwood & Co. step in . . .
For more than fifty years, the country has been affected by a horrifying epidemic of ghosts. A number of Psychic Investigations Agencies have sprung up to destroy the dangerous apparitions.
Lucy Carlyle, a talented young agent, arrives in London hoping for a notable career. Instead she finds herself joining the smallest, most ramshackle agency in the city, run by the charismatic Anthony Lockwood. When one of their cases goes horribly wrong, Lockwood & Co. have one last chance of redemption. Unfortunately this involves spending the night in one of the most haunted houses in England, and trying to escape alive.
Set in a city stalked by spectres, The Screaming Staircase is the first in a chilling new series full of suspense, humour and truly terrifying ghosts. Your nights will never be the same again . . .
*******
This is my first book by Jonathan Stroud and I can guarantee it won’t be my last. Instantly I fell in love with Jonathan’s sense of humour. He really is a very witty writer and the banter that jumps between his three main characters kept me entertained all the way through the book. There is a certain Britishness to their tone and manner. Their need to think things through over a cup of tea had me nodding my head in agreement.
The book appears to be set in an alternate London. A London where it is normal for every kid to see ghosts, but it still holds elements of the London we have now.
Lucy is an extremely strong character. She doesn’t suffer fools gladly and she comes across as more capable and in control than either of her male companions.  Lockwood gives me the impression, that if offered the job, he would make an excellent Dr Who. There is an air of mystery surrounding him; visible through the way he thinks and works. I don’t think we’ve seen the real Lockwood quite yet. I felt he was hiding something. George, bless him, he comes across like a bumbling snail. Plodding along, working through the details while Lockwood and Lucy race into everything head first.
The story has lots of scary elements to it. Not sure I would be heading to Combe Carey in a hurry. There was so much evil emanating from it, I’m surprised by the bravery of these three characters.

I thought the plot was brilliant and I was completely entertained all the way through the story, even to the nail biting end. This is the first book in the series and I don’t know why it took me so long to read it, but I shall definitely be waiting with baited breath for the second book.
at November 12, 2013