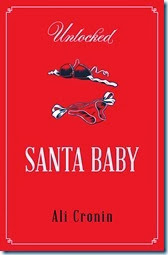 I watched them pile in, their posh-boy flush even more pronounced after their first day on the slopes. Hats, gloves, padded jackets and trousers were pulled off and left in a heap by the door, each man ruffling and raking his hair through his fingers.
Pages – 76
Published by Unlocked Books in November 2013
Book Summary
It's Christmas, and also the end of Annie's first few weeks as a chalet girl up in the Swiss mountains. Her boyfriend back home has gone off travelling, and Annie's not exactly feeling full of festive spirit. She really isn't in the mood for the stag party of posh-boys who've just arrived...
And sure enough, it isn't long before one of the party - alpha male George - is coming on a little too strong, and making it clear he'd relish getting Annie under the mistletoe, and into his bed.
She's almost tempted. George is funny, in a loud, arrogant kind of way, and he's certainly attractive. But Annie is more interested in someone else... the shy, quiet one of the group, who doesn't quite seem to fit in with the rest of the public school boys. Pity he's got a girlfriend - according to George, that is.
But the days roll on, and despite the freezing temperatures on the slopes, it's hotting up in the chalet, and Annie is close to boiling point. The question is, does a certain person feel the same way...
******
I love how different each Unlocked novella is, even though they all feature Christmas romance. This one whisks us away to the Swiss mountains, where our main character is trying to work out what is going on with her relationship, which her boyfriend has put on hold. Not looking for any type of romance, George attempts to persuade her into a quick fling.
I hated George; he epitomised all the things I don’t like in a man; thinking he is God’s gift to women, and that every girl should be clinging to his ankles in a desperate attempt to gain his attention. When he doesn’t get the detention, he feels he deserves, he gets nasty.
Sam on the other end, was just gorgeous. A real tonic for Annie, during a storm of upsetting events. It just goes to show, the shy ones should never be underestimated.
Another delightful little Christmas romance to tinsel up your taste buds in preparation for the most romantic time of year. Tight plotting and brilliant characters ensures a lovely novella that can easily be read in one night.
at November 20, 2013