Since You’ve Been Gone by Anouska Knight 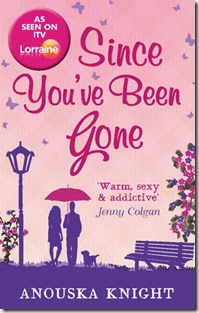 It was supposed to be a day off. He’d promised me he wouldn’t be gone long. He just needed to check that the lads were behaving themselves, staying safe; he didn’t want to be writing up any more incidents of severed anythings for a while, and that meant keeping on top of them. I’d promised to make his favourite, lemon and basil linguine, and he promised to be home on time, before it had chance to spoil.
Published in July 2013 by Mills and Boon
Pages – 386
Summary
In one tragic moment, Holly Jefferson's life as she knew it changed for ever. Now to the external world, at least she's finally getting back on her feet, running her business, Cake. Then she meets Ciaran Argyll.
His charmed life feels a million miles from her own. However, there's more to Ciaran than the superficial world that surrounds him, and he too is wrestling with his own ghosts.
Will Holly find the missing ingredient that allows her to live again and embrace an unknown and unexpected tomorrow?
How do you learn to love again?
******
This book feels like a serendipitous find. When I received it, I was a little reluctant to read it. I was convinced it probably wasn’t my thing and I was positive that the main character had a cheating husband. I couldn’t have been more wrong if I tried and as I embarked on reading it, I was completely sucked in. I found myself desperate to read more every time I put it down.
Within the first few chapters I quickly invested a lot in the main character, Holly. She was on the verge of leaving the very dark tunnel she had lived in for a couple of years and I desperately wanted to hug her. She was brave on the outside and didn’t want anyone to feel sorry for her, but sometimes in the deepest, darkest hours, the things we hold dear come back to haunt us.
I loved Ciaran as soon as he showed up, even if he was a little bit of a unwelcome character. The more I got to know him, the more I fell in love with him. He was just right for Holly,  a welcome respite to her darkest hours. The chemistry between Holly and Ciaran was electrifying and I was so sad to finish the book. It is one of those books you want to hug and read again and again.
For a debut novel, I would say it is extremely well written with an excellent well paced story line that would give established authors a run for their money. It has you desperate to find out what will happen next between Ciaran and Holly, reminding me of Jilly Cooper’s classic novels. I am now a life long fan of Anouska Knight and I can’t wait to read her next book.
at November 15, 2013