Under The Mistletoe by Kate Kingsley 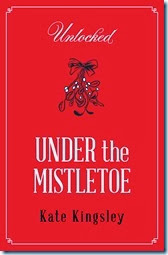 ‘Of course I love you, Ness,’ Jay whispers. He strokes the small of my back, that special spot only he knows, and I press against his naked chest, closing my eyes for his kiss. His gentle, hungry…
Published by Unlocked Books in November 2013
Book Summary
Ness is looking forward to hanging out in Brooklyn with her girlfriends over Christmas, while also deciding what to do with her life, and getting over her split with Jay the jerk.
She's not thrilled then, when her mum tells her that she's bought her a ticket to England to spend some time with her dad in the countryside. Spending the festive period with a bunch of sheep and cows is not Ness's idea of a good time. And though her arrival does nothing to change that, she soon has a major distraction in the form of Dominic Dumont, whose parents own the massive stately home where her dad is caretaker.
Despite being upper class, arrogant, selfish and reckless, Dominic soon starts to work his charm and Ness begins to find it difficult to ignore him. A game of 'Seven Minutes in Heaven' results in the hottest kiss Ness has ever had in a cupboard full of coats, and when the two of them get lost in the mist out in the grounds, they cling to each other - with and without their clothes on...
*******
Out of all the novellas from Unlocked Books this Christmas, this is by far my favourite. I think it must be the gorgeous setting of an old mansion decked out for Christmas and covered with snow. It oozes Christmas romance.
The book is only a novella but it doesn’t take you long to understand the way Ness is feeling. She feels like her mother and step father couldn’t wait to see the back of her, and she is shipped her off as soon as possible to England. Her dad doesn’t even let her get over her jet lag before setting her up in with a baby sitting job, where she quickly runs into the rather hot headed, yet very sexy Dominic. And when I say sexy, I mean SEXY! Dominic is the exact opposite of Ness, never really had to work hard for a living as his dad is absolutely loaded, while Ness’s dad is the caretaker for Dominic’s home.  Yet these two have something in common, they are both not really wanted around by members of their immediate family and it isn’t long before things begin to hot up between them. As the story progresses, you realise Dominic hasn’t had it as easier as you first might have thought and you warm to him even more.
A feel good, Christmas gem to easily be read in one evening.
After reading this book, I felt like I had indulged in a rather expensive box of chocolates and eaten them all in one go. I was sad when it ended, and I really hope we get to meet Dominic and Ness in the future, because I really do think there is more of their story to tell. They relationship is screaming with difficulties they will have to face as it progresses. More Ness and Dom, please Unlocked Books!
at November 14, 2013