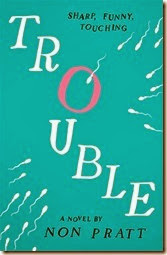 So I had sex with Fletch again last night. It was all right, better than last time anyway, and Fletch is a laugh. And he’s not so bad-looking…although not so good without his clothes on.
Published by Walker Books in March 2014
Pages – 384
Summary
A boy. A girl. A bump. Trouble.
Hannah’s smart and funny ... she’s also fifteen and pregnant. Aaron is new at school and doesn’t want to attract attention. So why does he offer to be the pretend dad to Hannah’s unborn baby?
Growing up can be trouble but that’s how you find out what really matters.
*****
If you’re expecting a run of the mill story about a kid being careless and getting pregnant, then you have the wrong book, because this story is so much more than that. Just because an underage girl gets pregnant, it doesn’t always mean it was straight forward. As you read Hannah’s story, you never once feel that the character is being judged for her actions.  You don’t find yourself thinking that she was stupid, because as this story shows, there are a lot more intricate factors that need to be considered.
Told from dual perspectives, this book follows Hannah’s pregnancy through the three trimesters. You are holding her hand when her secret is revealed and you are still there squeezing her fingers tightly when her new child enters the world.
This book is more about trust and friendship than anything else. The strong bond that develops between Aaron and Hannah, is beautiful and heart-warming.  Aaron will do anything he can to help Hannah, even though he knows it won’t be an easy ride. You love him from the start. He really isn’t the type of boy to sleep through all the girls in his classroom; his past has made him so much more maturer and reliable than the other kids he mixes with.  As a mum of teens, I felt that the author captured the teen voice with ease, giving the situation the reality it deserves. If I was to compare the style of this writing to another authors, I would probably say along the lines of Dawn O’Porter.
This book is sensitive yet humorous at times, not to mention controversial. This is a definite must for every teenager. I honestly think this book will be winning awards before this year is out. A strong debut voice carving her place in the UKYA market.
at March 18, 2014