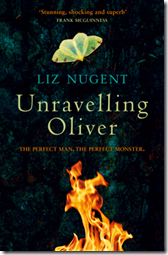 I expected more of a reaction the first time I hit her. She just lay on the floor holding her jaw. Staring at me. Silent. She didn’t even seem to be surprised.
I was surprised. I hadn’t planned to do it.
Published by Penguin and Penguin Ireland in March 2014
Pages - 231
Oliver Ryan is a handsome and charismatic success story. He lives in the leafy suburbs with his wife, Alice, who illustrates his award-winning children's books and gives him her unstinting devotion. Their life together is one of enviable privilege and ease - enviable until, one evening after supper, Oliver attacks Alice and puts her into a coma.
In the aftermath, as everyone tries to make sense of his astonishing act of savagery, Oliver tells his story. So do those whose paths he has crossed over five decades. What unfolds is a story of shame, envy, breath-taking deception and masterful manipulation.
Only Oliver knows the lengths to which he has had to go to get the life to which he felt entitled. But even he is in for a shock when the past catches up with him.
*******
The title of this book couldn’t be more apt. Unravelling Oliver is exactly what happens as the story progresses.  In the first couple of chapters, you’re introduced to a character oozing with sophistication and charisma, appearing to the world as one of life’s winners. Yet when his wife is found beaten up and unconscious on their kitchen floor, you realise Oliver is not as clean cut as he seems. After his arrest, you are left in no doubt that Oliver cannot be trusted and should be feared. Glimpses of his true nature appear as his past steps up to greet him, revealing him as one of the most calculating and manipulative characters you will ever meet; yet you struggle through the first half of the book to identify why he is such a monster.
Set in Ireland, the book spans Oliver’s life, highlighting the events that led to the present day. His story is retold in short, Alan Bennett style, monologues by his family, friends and acquaintances. As each character talks about him, the carefully structured layers of deceit disintegrate, revealing a cold and manipulative man. Hidden deep within him, are years of misery and intense hate that eventually spill out into a violent end.
This story surprised me; as the truth about Oliver is revealed, I was astonished by the life path and decisions that propelled him forward. This is one of those quiet books that tap away at  your emotions until they crack, before leaving a lingering distaste in your mouth at the end.
This book will appeal to fans of Sophie Hannah and Barbara Vine.  It will capture the interest of anyone looking for an intensely gripping psychological tale that leaves you questioning whether you really know the people closest to you.
at March 11, 2014