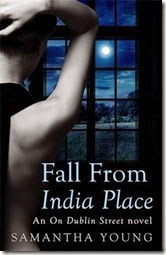 I’d made a promise to myself when I stepped onto the cobbled streets of Edinburgh on the way to my first teaching job that I’d be the kind of teacher who would do whatever it took to reach my students. Never mind that now keeping that promise meant embarrassing myself and them with my fantastically awful drawing skills.
Published in June 2014 by Piatkus
Pages – 283
Summary
When Hannah Nichols last saw Marco D’Alessandro, five long years ago, he broke her heart. The bad boy with a hidden sweet side was the only guy Hannah ever loved—and the only man she’s ever been with. After one intense night of giving into temptation, Marco took off, leaving Scotland and Hannah behind. Shattered by the consequences of their night together, Hannah has never truly moved on.
Leaving Hannah was the biggest mistake of Marco’s life, something he has deeply regretted for years. So when fate reunites them, he refuses to let her go without a fight. Determined to make her his, Marco pursues Hannah, reminding her of all the reasons they’re meant to be together.…
But just when Marco thinks they’re committed to a future together, Hannah makes a discovery that unearths the secret pain she’s been hiding from him, a secret that could tear them apart before they have a real chance to start over again.
******
This is one of those books that has you cursing by the end of it. Cursing that it’s finished, as you wave goodbye fondly to the characters you have met. Cursing that you didn’t start the series right at the beginning.  I now have to get every last book in the Dublin series, so that I can meet the whole family properly.
It isn’t a necessity that you read the previous books, but I think it may have helped me a little during the first few characters, where we are introduced to an abundance of characters, who I felt lost among. In hindsight, if I’d read the previous books, these lovely characters would’ve been like old friends. So my advice would be to either read the previous novels, or bear with the many introductions in the first few chapters as you will grow to love them all.
I can’t say I loved Hannah to begin with. I felt she was a little spoilt. However as the story progressed, she grew on me. When I discovered her past, I could see why she was treated so gently by the rest of the family. Now Marco was a whole different story. I loved him as soon as he turned up in the book. He oozed hotness as he did everything he could to sweep Hannah off her feet.
This book isn’t just full of sexual tension and hot guys. There is so much more to it, as it deals with some very heavy subjects. I’d love to share those with you, but that would be giving  away an important aspect of the story. The theme of family unity is strong within the story and it made me yearn for a large family.
All I can say is read this book!
Calling all fans of Abbi Glines and Jamie McGuire, meet Britain’s equivalent – Samantha Young.
If you love hot romance within real relationships then this is the book for you. Personally I am really looking forward to exploring the author’s back catalogue, so that I can get to know the rest of the family.
at June 12, 2014