My Second Life by Faye Bird 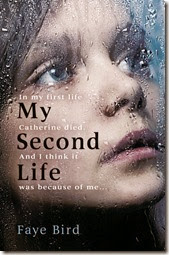 Being an avid reader, I love discovering new talent which can often go unnoticed. The unusual premise of the debut novel really caught my attention. How would you cope if you knew you had a lived before and that your previous family were living close by? Coming highly recommended from well-known author, Anthony McGowan, I couldn’t resist delving further into such an intriguing tale.
The main character, Ana, has grown up with the knowledge that this isn’t her first life. Struggling to bond with the woman who gave birth to her, she constantly yearns for her first mother. As time passes, Ana learns to accept that she can’t return to that life, only to find herself thrust back into it after recognising Frances, (a close family friend from her previous life) while visiting her grandmother in hospital. If that isn’t enough to deal with, seeing Frances brings back a deeply hidden memory, involving the death of a child, that Ana is convinced she is responsible for.
This book catapults you through a range of emotions as the plot heads off in a race to discover the truth. You struggle alongside Ana when confronted with her original parents and feel her pain at the lack of recognition and emotion shown by them. As the story unfolds, Ana’s memories of the events surrounding Catherine’s death are called into question.
The idea of a past life is a mind boggling one and I felt the author dealt with it extremely well, giving the story the believable factor it required. The ending surprised me, but on reflection, there really wasn’t any other way for the story to be resolved. This is an intriguing tale that leaves you questioning the whole concept of reincarnation.
at July 31, 2014