Follow">http://www.bloglovin.com/blog/3357621/?claim=un26basgavt">Follow my blog with Bloglovin
I am really pleased to welcome Sarah Sky onto the blog for the first time. Scholastic recently published her second novel in the Model Spy series, Fashion Assassin. I will pass over to Sarah now to tell you her Top Ten Spy Gadgets from History. 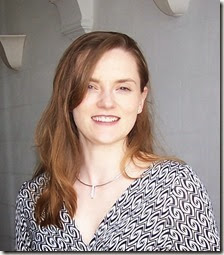 JESSICA Cole has no intention of spying again after nearly being killed by deranged supermodel, Allegra Knight and a rogue MI6 agent.
That’s until she’s blackmailed into posing undercover as a bodyguard for brattish Russian supermodel, Katyenka Ingorovka.
What seems like a simple job aboard Mr Ingorokva’s  super yacht in Monaco soon turns into a deadly mission to stop the world’s most dangerous weapon from falling into the wrong hands.
Jessica needs  lots of cool gadgets to help get her out of this mission alive.
Among her stash is a lipstick with a hidden movement sensor; sunglasses that contain facial recognition technology and carry out criminal records checks; a necklace that allows you to breathe underwater and an iPod nano which instantly translates different languages.
Spies throughout history have needed gadgets to help them – and these are my top ten.
1 Lipstick pistol
Long before Lucy Wilde fired a lipstick taser at Gru in Despicable Me 2, KGB operatives were using lipstick pistols during the Cold War. They looked like lovely, classy silver lipsticks but contained deadly 4.5mm single shot weapons. The KGB also had a single shot rectal pistol, which was encased in rubber. You would not want that to go off accidentally!
2 Button hole camera
This device was also used by Russian spies during the Cold War. The camera was hidden behind a button in the coat. The spy would squeeze a shutter cable hidden in the pocket to take a picture. This would cause the button to open and take a piccie, without the target ever realising. Hidden surveillance is far, far more sophisticated nowadays.
3 Explosive coal
American spies during World War Two hollowed out large pieces of coal to conceal explosives. The unsuspecting target would throw the piece of 'coal' into a boiler, causing a massive explosion.
4 Spy shoe with heel transmitter
The shoe with a radio transmitter was another staple of the KGB. The transmitter, batteries and microphone were hidden inside the heel of a target's shoe. Someone with access to the target's clothing, such as a hotel maid, was given the task of planting the shoes. Once a white pin was pulled from the heel, the transmitter was activated. The person wearing them was unaware they were transmitting all their conversations to the KGB.
5 Escape boots
During the Second World War, these boots were designed to help English pilots camouflage into their surroundings once they'd landed their planes in occupied territory. A small knife was hidden in the 'flying boots' and used to cut off the top. Once this was removed, they looked like ordinary walking shoes.
6 Spy Rock
It looked like a normal rock, but this spying device was created in a British laboratory and cost millions of pounds. It could be kept underwater for long periods and thrown from the top of a nine storey building, but it wouldn't damage what was inside. The rock - hidden in public view in Moscow - hid a device which stored classified data, provided by Russian informants. Long before bluetooth,  it could be downloaded onto small, palmtop computers, carried by British spies. The rock was discovered in 2006 - causing a huge diplomatic row between Russia and Britain. Such was the embarrassment about its discovery, Britain only admitted it was a 'spy rock' in 2012.
7 Death by Chocolate
In 2012, historic papers revealed a daring Nazi plot to assassinate Sir Winston Churchill with a bar of exploding chocolate during the Second World War. Hitler's bombmakers had created an explosive device, coated with a thin layer of chocolate, which was then packaged in black and gold paper. The plan was to place the bars - named Peters Chocolate - among other luxury goods taken into the dining room which was used by the War Cabinet. The deathly confectionary had a range of several metres and could have wiped out the Cabinet. Luckily, the plot was scuppered by British spies who discovered the chocolate was being produced.
8 Pigeon cameras
I like these devices because they illustrate how spying has developed over the years. During World War One, carrier pigeons were fitted with small cameras and flown over military sites. They were able to retrieve useful images of enemy weapons and armoury. A century later, we have spy drones which can take a photograph of someone reading a newspaper on the street from the air - such is their range and power.
9 Mini insect spy drones
They look like insects, but they're manmade and contain cameras, enabling them to get through open windows and into the smallest of places. As early as 2007, the US government was reported to be developing 'insect technology'. US anti-war protestors claimed to see tiny dragonflies hovering above them at demonstrations. In 2008, the US air force showed off spy devices as 'tiny as bumblebees' that wouldn't be detected flying into buildings. France, the Netherlands and Israel are all believed to be developing similar tiny drones.
10 Black hornet nano drones
This mini helicopter can fly for about 20 minutes, taking photographs, and has a handheld controller and rechargeable batteries. It has a rotor span of 100mm and is the world's first operational nanotechnology drone system. These mini helicopters were used by British soldiers in Afghanistan to get a birds' eye view of the battlefield.
* Sources include The International Spy Museum, Washington. 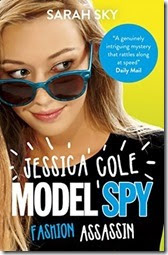 Fashion Assassin by Sarah Sky is published by Scholastic, along with Code Red Lipstick, the first book in the Jessica Cole: Model Spy series. 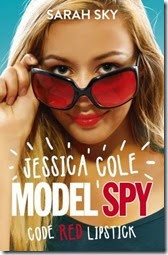 About the Author
Sarah Sky is the author of Scholastic's Jessica Cole: Model Spy series with Code Red Lipstick and Fashion Assassin. Catwalk Criminal is published in June 2015.
Sarah is a freelance education journalist and lives in West London with her husband and two young children.
She grew up in Sutton Coldfield, West Midlands, and studied English at Nottingham University before gaining a post-graduate diploma in journalism at Cardiff University.
She trained as a journalist at the Western Daily Press in Bristol. Her highlight was interviewing screen legend Charlton Heston and lowest point was being sneezed on by a cow at a fat stock competition.
Sarah worked as an education correspondent for a national newspaper before going freelance. She now divides her time between journalism and writing.
She loves reading, baking, table tennis and martial arts. She's a green belt in kick-boxing and a brown with two white stripes at karate, currently training for black.
Author Links:
Twitter: http://twitter.com/sarahsky23
Goodreads: https://www.goodreads.com/author/show/8526263.
Sarah_Sky  Website: http://www.sarahsky.co.uk
Check out the rest of the stops on the tour below.