The Darkest Part of the Forest by Holly Black 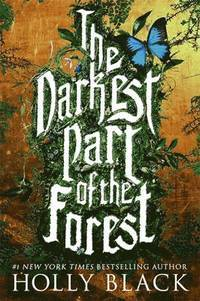 Down a path worn into the woods, past a stream and a hollowed out log full of pill bugs and termites, was a glass coffin. It rested right on the ground, and it slept a boy with horns on his head and ears as pointed as knives.
Published by Indigo in February 2015
Pages – 272
Summary
Children can have a cruel, absolute sense of justice. Children can kill a monster and feel quite proud of themselves. A girl can look at her brother and believe they’re destined to be a knight and a bard who battle evil. She can believe she’s found the thing she’s been made for.
Hazel lives with her brother, Ben, in the strange town of Fairfold where humans and fae exist side by side. The faeries’ seemingly harmless magic attracts tourists, but Hazel knows how dangerous they can be, and she knows how to stop them. Or she did, once.
At the center of it all, there is a glass coffin in the woods. It rests right on the ground and in it sleeps a boy with horns on his head and ears as pointed as knives. Hazel and Ben were both in love with him as children. The boy has slept there for generations, never waking.
Until one day, he does…
As the world turns upside down, Hazel tries to remember her years pretending to be a knight. But swept up in new love, shifting loyalties, and the fresh sting of betrayal, will it be enough?
******
It’s no secret that I am a big fan of Holly Black’s. Ever since Tithe (which I adored) came out over ten years ago, I have always found myself excited and desperate to read the author’s next book.
Holly writes fantasy in a way that turns classic tales completely on their heads. She rips them to pieces, throws out anything stereotypical, revs up the angst, creating her own brand of fresh, new stories.  This story revolves around a boy, trapped asleep in a coffin. Straight away, you might think this will follow in the footsteps of Snow White and the Seven Dwarves, but you couldn’t be further from the truth. Firstly the boy is freed, by a girl. A rather exceptional kick ass girl who has some hidden secrets. I won’t say a lot more on that as I don’t want to spoil the story, but she really is a remarkable character. The plot looks strongly at wishes and basically you realise that you do need to be very careful what you wish for, as there will always be consequences.
Within this tale of urban fantasy, there is a fictional town called Fairfold, where the modern world easily blends with the fantasy one. The residents think nothing of protecting themselves against the fae.  Fairfold resembles another fictional town that  I have grown to love over the years – Newford, where Charles De Lint set the majority of his urban fantasy books. If you haven’t read any books by Charles De Lint, I would strongly recommend you do.
Holly Black writes so beautifully. Her descriptions are so vivid and sensory, you find yourself slipping into the story. With this book, I feel like Holly Black has finally arrived back home. She is writing a genre that she excels in. Fae and Holly Black should basically merge into one.  I really hope we will see more books set in Fairfold, as I am not ready to leave these characters behind.
at March 09, 2015

Email ThisBlogThis!Share to TwitterShare to FacebookShare to Pinterest
Labels: fae, fairies, holly black, indigo, the darkest part of the forest