Out of the Easy by Ruta Sepetys – reviewed by Isabella Samuels 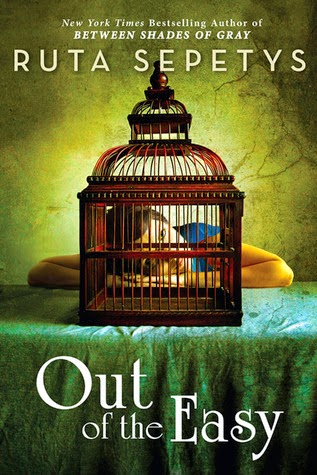 ‘My mother’s a prostitute. Not the filthy streetwalking kind. She’s actually quite pretty, fairly well spoken, and has lovely clothes. But she sleeps with men for money or gifts, and according to the dictionary, that makes her a prostitute.’

Summary from the publisher:
Josie Moraine wants out of The Big Easy – she needs more than New Orleans can offer. Known locally as a brothel prostitute’s daughter, she dreams of life at an elite college, far away from here. But then a mysterious death in the Quarter leaves Josie caught between her ambition and a clandestine underworld. New Orleans is luring Josie deeper in as she searches for the truth, and temptation beckons at every turn.
****
Reviewed by Isabella Samuels

Josie Moraine is possibly the best YA heroine I have ever come across. Let’s be honest, young superwomen of dystopian, fantasy and romance novels tend to be fairly predictable and often teetering dangerously on the edge of vacuous. Josie is a different breed altogether, she’s real. Josie is tenacious, ambitious, smart and resilient. She commands your respect and admiration, I want to be her – obviously just without the prostitute mother, the perverted business man salivating over your every move and the creepy mobster who has a personal vendetta against you. However, the love-interest I would take any day. I fell in love with him within the first sentence of his introduction: ‘Jesse Thierry sat on his motor-cycle.’ From there on in I was completely and utterly his.  Sepetys does this for every character, from cat-house madams to diner waitresses, she has your empathy and interest without you even noticing she’s asked for it. She has the most astonishing, spell-binding gift for creating such atmospheric settings with these captivating, compelling characters all steeped in stomach churning tension.

Sepetys manages to deliver human suffering and injustice with a Mike Tyson-style punch without ever forcing you to wallow in pity for them - a result of Sepetys’ unique writing style, which admittedly can take some time to get used to. It was unlike anything I’d ever read, she writes to fit the world she has created – blunt, harsh and fast-paced – without any elaborate, detailed description. It works, it assists her in the many shocks she gives us, it is atmospheric but, as I say, you may need to give it a couple of chapters to adjust to it.

This is Ruta Sepetys’ second novel, the first – Between Shades of Gray – was more of a tribute to Lithuanian Gulag victims, whereas Out of the Easy showcases Sepetys’ real story-telling talent. There wasn’t a single chapter where I wasn’t shocked or tense or frightened. I defy you not to be enthralled by this book. I’d recommend setting aside a whole day with no possible room for distractions – you will not want to leave your seat.

Email ThisBlogThis!Share to TwitterShare to FacebookShare to Pinterest
Labels: isabella Samuels, out of the easy, penguin books, ruta septys