“Do you not know that a man is not dead while his name is still spoken?”
― Terry Pratchett, Going Postal 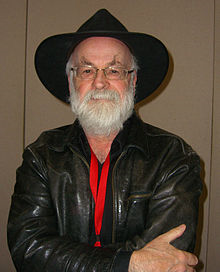 Today marks the beginning of a blog tour like no other. Authors, vloggers and bloggers stand united as they bid farewell to one of the greatest writers of this century.We say goodbye the only way we know how – by sharing our love of Terry Pratchett’s  books across the internet. Everyone involved  desperately wanted to be part of this tour and I truly believe we have created a fitting send off for such an influential writer.
I asked the tour participants  to share a few words about the legendary author. So I will now pass you over to them.
‘I grew up with Terry Pratchett books, my first owned copy is signed by him. It's hard to imagine there won't be any more. ‘
Jax – Liveotherwise
‘Terry Pratchett's books have been a source of inspiration, enjoyment, emotion and learning for me ever since I first picked one up at eleven years old. I've spent much of my life collecting Discworld, attending conventions and making friends with fellow fans. It's so great to have the chance to be part of this blog tour in celebration of the great man's amazing life and work.’
Sophie Cleverly – Author
‘Terry Pratchett said "It's still magic even if you know how it's done." And his own quote applies to his body of work. I know what it takes to write, but to write a series of books taken to so many people's hearts is nothing short of magical.’
Kirsty Stanley – Kirstyes
‘I discovered Terry around the time that the TV adaptation of Hogfather was on and it was the first of his books I read and I haven't looked back since. Whilst I haven't read them all and have slackened a bit in my quest to read everything Discworld, I vow to keep going and cannot wait to share the many adventures that lie ahead of me with the characters of the Disc that so many people around the world have fallen in love with. Terry was an incredible man, a genius some would say, and this blog tour is testament to just how many people love him and how far he, and his words have reached!’
Ryan – Empire of Books
" Terry Pratchett created a world so unique that will live on in so many ways and through so many people. It is a place that I can dive into at any given point and makes up my past, my present and I am excited or the future journeys it will take me on!"
Stephen - Dark Readers
"When I found out that Sir Terry Pratchett had died, I gasped out loud. As I have only just been brave enough to start reading him the past few months, I feel sad of his passing, but with so many wonderful and well-loved books, the adventure is only just beginning for me and many other readers round the world. So, shall we get this Discworld party started?"
Andy, The Pewter Wolf
‘I've never read any of Terry Pratchett's work before (until now) but he was always appeared to be a larger-than-life figure. He seemed such a kind man who was always game to make a joke about the darker side of life.
Pratchett seemed too big a human being to ever leave this world but I'm glad that, even after his death, he's given us all so many wonderful tales to runaway into.’
Laura - Sister Spooky
‘I have read a lot of Terry Pratchett over the years more so when I was younger.  I loved immersing and losing myself in his fantastic worlds and creations, quite often devouring his books in a day.  I cannot wait to read every ones posts on this brilliant blog tour.  A truly fantastic celebration of a fantastic writer!’
Michelle - Tales of Yesterday
‘Ah,Terry Pratchett. I wouldn't know where to begin in working out how much his writing has influenced me. But from the moment I first picked up Mort, aged 15, it was love and buggritt, I'm missing him already.’
Tamsyn Murray - Author
"I met Terry when I was at uni - I think his was the first book signing I ever attended! He was as friendly and interesting in person as you'd expect from his wonderful books, signing copies of Interesting Times and The Thief of Time for me and taking the time to talk to everyone personally despite the long queue of Discworld fans eager to meet him. His books are some of the only ones which I've loved consistently for the past 25 years or so, picking them up first as a child and returning to them time and time again without ever getting bored."
Jim - YA Yeah Yeah
'Despite being just an ordinary girl, a girl who is very probably not a long lost princess, who is somewhat lacking in magical swords, and who doesn't even have any unusual 'y's gracing her name, PTerry adopted me, and let me live his worlds. Worlds big beyond their pages, made of many shades of black and many colours of magic, and that soar off over the rim of every boundary that ever dared confront me.'
Stevie - Sable Caught
As you can see there is a huge amount of love for one of our finest authors.
The world seems a little darker already. The lights start to dim over Discworld, without Terry Pratchett to keep the flame alight. We must keep reading his books and spreading the word, breathing life back into the characters and the tales so that generation after generation remembers the greatness of Terry Pratchett. With this tour, we hope to bring new readers to his books. Help us share the love of Terry Pratchett by following us on this journey.
‘It is said that your life flashes before your eyes just before you die. That is true, it’s called Life.’
Terry Pratchett