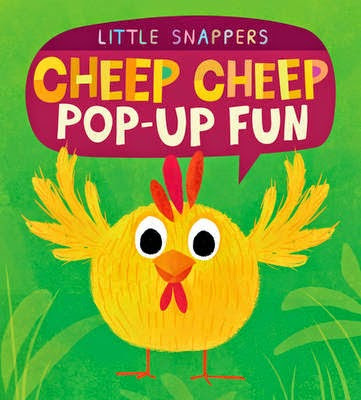 Which spotty, dotty animal is playing peek-a-moo?
It's laughing cow – she's happy now and pops right out at you!

Summary From Caterpillar Books
Lift the giant flaps to find out which colourful and quirky farm animals are popping out at you! This exciting pop-up flap book features cute and clever rhymes and a cast of funny farmyard characters.
*****
Review by Liss Norton
This book is full of colourful illustrations, flaps to lift and a variety of styles of pop-up picture. Add to that the fun rhymes, with clues to what might be hiding behind all the doors, and you have a book that's sure to be popular with young children.
I have only two criticisms. The first is that the title isn't exactly snappy, though the book is part of the Little Snappers range. The second is that the chicks don't look cute and fluffy, as chicks should; they each have a red comb and wattle which makes them look a bit like strange, round, undersized cockerels.


Having said all that, neither two-year-old Barnaby nor five-year-old Dominic seemed bothered by the mutant chicks. Dominic enjoyed guessing the answer to the rhyme before opening the flaps. Barnaby was desperate to open the flaps as fast as he could and insisted on turning over the page before I'd finished reading the text. Clearly then, a pop-up book with child appeal!
at May 09, 2015