Human or Fish? – a guest post by Katherine Roberts

Katherine Roberts, author of Song Quest, the first part of the Echorium trilogy, is the first author on the blog this week, to talk about mermaids. Song Quest won 2000 Branford Boase Award. Since then, Katherine has been published by HarperCollins, Chicken House/Scholastic US, Carlton, and Templar, and her books have been translated into 14 languages worldwide. 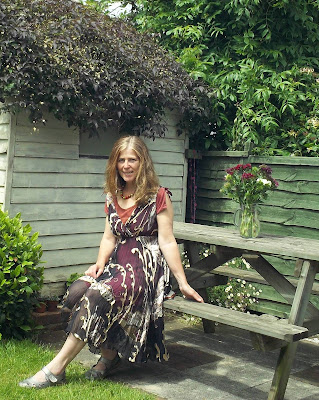 Half human creatures have always fascinated me. That’s why I put several of them into my Echorium trilogy, where you’ll meet mermaid-like creatures called ‘merlee’. I renamed them because mermaids are by definition all female – and presumably maidens too, having modest fish tails in place of, ahem, human legs. I think that’s part of their attraction for younger readers. Mermaids are the ultimate innocent creatures who never really grow up. At least, I’ve never seen a wrinkly, grey-haired mermaid.

In the first book Song Quest, the shoal of merlee Rialle encounters includes both males and females along with their newborn children:

“Close up, the adults were bigger than she had thought, yet she felt no fear. Strong fingers plucked at her hair, and muscular tails curled around her legs. There was some merriment over her strange colouring. But their songs were of gladness and welcome, overlaid by faint playful melodies. It took her a moment to realize these were coming from the almost transparent merlee children, whose tiny tadpole-like bodies emerged in clouds from the chest pouches of the females.”

With fantasy creatures, half the fun of writing about them is to work out how an invented creature might survive in their world. It made perfect sense to me that my merlee, having fish tails, should breed like fish and lay eggs. I also gave my merlee the power of song over wind and waves, borrowing this idea from the Ancient Greek myths of sirens who lured sailors to their deaths with their enchanting voices. In the original myths, sirens usually have wings and are more seabird than mermaid, but fantasy grants authors a licence to mix and match – and also (even with mermaids) a licence to kill.

I constructed a whole plot around my merlee. Since they lay fish-eggs, I wondered what if (a fantasy author’s favourite question) those eggs turned out to be a rare delicacy for humans, like caviar in our world? That would give unscrupulous humans a good reason to hunt the female merlee… but mermaids are half human as well as half fish, so straight away there is a moral dilemma. Should merlee be treated as fish (when it might be acceptable to catch them in nets and eat them, like we do fish in our world), or as humans (when clearly it is not right in any world)? So I created a Half Creature Treaty, enforced by the human Singers of the Echorium, to protect the merlee and other half creatures in my books. The sailors at the start of in Song Quest break this treaty, triggering Rialle’s quest to discover who ordered the merlee hunting, while rebellious Kherron joins the sailors to escape the Echorium.

When they come face to face with the evil Khizpriest who ordered the merlee hunt, both Rialle and Kherron have their loyalty to the Echorium sorely tested… and you’ll be pleased to know the merlee finally get a chance to take their revenge on the men who were eating their unborn children. 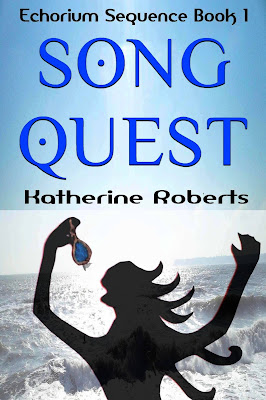 Find out more about the Echorium trilogy on Katherine’s website:
http://www.katherineroberts.co.uk

Summary of Song Quest
Welcome to a world from another time -- where legendary half-creatures still exist. A world where nature itself can be controlled by unearthly music. A world where the forces of good and evil are held in harmony by the Singers who have mastered the secret Songs of Power. A world on the brink of destruction, threatened by a dark lord whose evil knows no bounds. Rialle and Kherron, two novice Singers, are all that's left to stand in the enemy's way. Stranded in a strange land with only one another to rely on, these former rivals must work together if they are to survive. In a timeless coming-of-age journey, Rialle and Kherron discover the strength of spirit that lies within them in their quest to help good triumph over evil.
at June 08, 2015