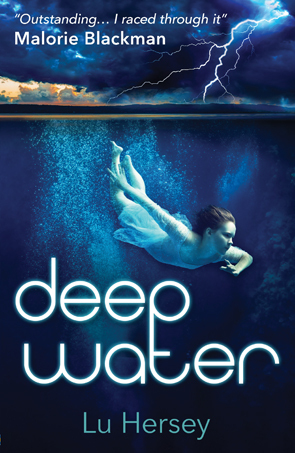 The rain drums on my head as I run. Freezing water drips off my hair and under my coat collar. As I reach my street, I see the house is still in darkness. All the other houses have lights on already.
My fingers don’t work properly because they’re too cold. I fumble for my keys while next door’s cat winds himself around my legs.
I open the front door carefully, but he’s too quick for me. He shoots down the hall and disappears into the dark of the kitchen at the back of the house. As I sling my rucksack down and flick the light on, I hear him hissing. He bolts back down the hall, hackles raised and tail fluffed up, and runs outside. Cats are weird. Usually it takes me ages to get him out.

Summary from the Publisher
When Danni’s mum goes missing, she has no choice but to go and live with Dad – in a remote Cornish fishing village, miles away from home. But when she arrives, complete strangers seem to recognize – and – shun her, despite Danni only having visited once or twice. Worse, strange things start to happen: salt water seeps through her hands. Her dreams become nightmares. Then her nightmares begin to reflect reality, and Danni discovers she is not entirely who – or even what – she had always assumed.

The village has a dark and disturbing past and one she’s somehow connected to. With the help of Elliot, a boy who works in Dad’s shop, and her friend Levi from home, she sets out to discover the truth and save her mother. But Danni’s journey is far weirder and more dangerous than anything she could have imagined as she comes up against people who would prefer to see her – and all her kind – wiped off the face of the earth...
*****
Reviewed by K. M. Lockwood

I wanted to hate this book – Lu Hersey won the 2013 Mslexia Children’s Novel Writing Award with it – and I was only shortlisted. She went onto be agented and published, with a story that has some similar ideas to mine. {See my blog for more, if you like}

BUT actually it really does live up to its promise. I mean, when Malorie Blackman endorses a book, it has to be good. The beautiful dark blue cover, (created by the Usborne team) with its stormy skies and lightning, conveys the threat and magic in this YA debut. It’s contemporary, but not so on-trend that it will date too soon.

The blend of family and friendship – with a sparkle of romance, makes Danni an engaging central character. You get to see her in wide span of relationships. I particularly like the presence of the little girl Shell and the grandmother Mamwyn. The story reaches across the ages – and it’s not about teens doing things in isolation.

As you can see from the beginning above, it’s a deceptively simple read. It fairly races along with plenty of dialogue and events. It’s fine for confident readers who like sea magic and delicately portrayed romance. They should appreciate some rather scary peril – offset with sociable humour.

I’d like to say more good things – but I have to resist the urge to give spoilers. It’s enough to say that many readers will want to know what happens next to (most) of this intriguing cast of characters. The underlying themes of trust, maturity and destiny will surely show up in Book II – if there is one.
at July 10, 2015