The Quality of Silence by Rosamund Lipton 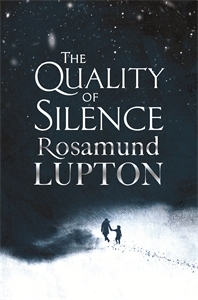 It's FREEZING cold: like the air is made of broken glass. Our English cold is all role-poly snowmen and 'woo-hoo! It's a snow day!' a hey-there friendly kind of cold. But this cold is mean.

Published by Little Brown in July 2015

On 24th November Yasmin and her deaf daughter Ruby arrived in Alaska.

Within hours they were driving alone across a frozen wilderness

Where no one lives

And night will last for another 54 days.

They are looking for Ruby's father.

Travelling deeper into a silent land.

They still cannot find him.

And someone is watching them in the dark.

It's always a delight to receive a Rosamund Lupton book. I've been a fan of hers since her first novel, Sister, and now reading this, her third book, I can see a definitive style that no other author has managed to imitate. Just like it's predecessors, this book keeps you on your toes.

I loved the Alaskan setting of this novel. Many years ago, I can remember reading Miss Smilla's Feeling For Snow, and this definitely had a similar iciness to it.It also reminded me of Northern Exposure, only with more action.  Last week, we all watched as the temperature went out of control, but  I could be found shivering as I lost myself in the Arctic conditions of this novel.

Not only do you get a good plot with this novel, you also learn something new. Fracking plays a big part of this novel and to be honest, I didn't really pay it much attention before. Living in an area, where fracking is a huge possibility for the future, the knowledge I gained from this novel has made me very concerned about the impact it will have on the environment and the human race. I won't be sitting back and ignoring it in the future. If the effects listed here are real, then we as a society need to put a stop to it.

I liked the way the book was told in first and third person. You get a real sense of whose story is being told. I do have a little niggle though. Being an avid reader of Middle Grade fiction, I  struggled with Ruby's dialogue. I didn't feel that she truly represented a ten year old when she spoke. Her voice seemed so much more maturer. I understand she has had to cope with a lot, dealing with the bullying she received because of her deafness, but I don't think she would've reached that level of maturity by her age.  I could be wrong and Ruby could be the exception.
I was also surprised to find Ruby an avid user of Twitter. It being such a public forum, I don't know many ten year olds who are allowed to use it. Snapchat, yes, but not Twitter. Having said that, I liked the way that social media was included and became part of the story, something many writers still shy away from.

Yasmin, Ruby's mother is an amazing role model for any woman. She goes above and beyond; the thought of driving an arctic lorry over the ice roads of Alaska, showed her bravery and determination. She really is a gutsy woman!

I really enjoyed jumping back into a Lupton thriller. If you love a thriller where you haven't a clue what might happen next, then this book is for you. Grab your winter woolies quickly, you are in for a icy chase against time!