Asking For It by Louise O'Neill 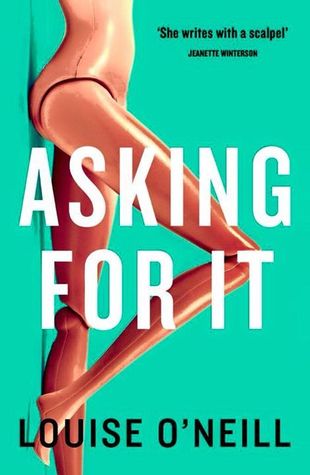 My mother's face appears in the mirror beside my own, bright red lips on powdered skin.
Her hair is still in its bob despite the sticky heat. She gets it done every Saturday.
'I deserve a treat,' she says as she leaves the house. 'I don't care how expensive it is.'

Summary
It's the beginning of the summer in a small town in Ireland. Emma O'Donovan is eighteen years old, beautiful, happy, confident. One night, there's a party. Everyone is there. All eyes are on Emma.
The next morning, she wakes on the front porch of her house. She can't remember what happened, she doesn't know how she got there. She doesn't know why she's in pain. But everyone else does.
Photographs taken at the party show, in explicit detail, what happened to Emma that night. But sometimes people don't want to believe what is right in front of them, especially when  the truth concerns the town's heroes...

This really is a difficult book to read, let alone review. Not because of the writing, as it is beautifully written and not because of the plot as the story is well paced and page turning. No, the problem I had with this book was the heart ripping situation we find the main character, Emma, in.

I would normally avoid books on rape, as I find them really upsetting. The lack of control the victim has over the situation, cuts like the sharpest knife. In this case, the situation is beyond painful as Emma is basically gang raped. Or is she? The underlying problem within this is that Emma doesn't really know the truth, so the reader never does either. We don't actually know whether Emma consented to it or not as she has no memory of events that night. She only has the photographic evidence and at first she makes out to everyone she is pretending to be asleep, which only makes her look like a liar. But the things the boys put her through, go beyond anything that you would willingly allow to happen to yourself. So I'm convinced that she didn't consent to any of this. She was taken advantage of. Now my question is - why the hell didn't everyone else in the book feel the same?

In society, it is often believed that if you dress like a slut, you are asking for trouble. If you can't handle your booze and mix it with drugs, then basically you're fair game to any hot blooded male. Well that is utter bollocks! In this day and age, you should be able to dress how you want for yourself. You are not dressing to please any man. So what if your skirt is a little short, or you are busting a wee bit out of your top, that doesn't mean you have screw me written on your forehead. Men should be able to control their urges and not see a woman's attire as an open invitation. You don't see women, dragging men to the nearest bedroom, when they appear bare chested, so why should a man think he has the right to sex because of the way you choose to dress.

Social media is shown as it's ugliest in this book. How easy it is to humiliate people and ruin their lives by the touch of a button. I've witnessed the repercussions of graphic photos being spread and know exactly how damaging it can be. I'm also aware how the education system has no idea how to deal with it. It should be a criminal evidence regardless of your age. No one should be able to spread personal pictures or videos of you without your consent.

I will admit that Emma doesn't come across as the most likeable character to begin with and I think that is the author's intention. She is self absorbed and hard nosed, thinking nothing of stealing from one of her best friends, convinced that her beauty deems her more worthy of these items. So her character appears a little cagey to begin with,
therefore it isn't surprising that people don't believe her at first. She has a reputation and people love to bolster a bad reputation and make it sound worse. To the point, at times you felt Emma almost believed what they said about her as well. But that still doesn't make her fair game!

I wanted justice for Emma right from the start. I wanted her to find peace. But in reflection of reality, we realise life isn't like that. Everyone in the town is convinced that Emma is a liar and that's wrong. Her family just want peace; they haven't the strength to fight and that makes me angry.

I am hoping this book will bring about change. I want to put a copy into the hands of every teenager. I want this book put on the sex education syllabus for all teens, so that they can see the reality of today's society and learn from it. We have a duty of care to our children to keep them safe, this book should be heralded as a handbook for modern life.

Congratulations to author Louise O' Neill for writing this book. I feel it will be around for many years to come. Hopefully it will be the book that changed society's perception over the right for every woman to wear what they want and not feel labelled or threatened.

Email ThisBlogThis!Share to TwitterShare to FacebookShare to Pinterest
Labels: asking for it, louise o'neill, quercus, rape