Cover Reveal - Rebel of the Sands by Alwyn Hamilton

I am so pleased to be one of the bloggers  taking part in  sharing this stunning cover for the debut novel, Rebel of the Sands by Alwyn Hamilton. Isn't it gorgeous. I love the colours used and the magical feel to it in general. 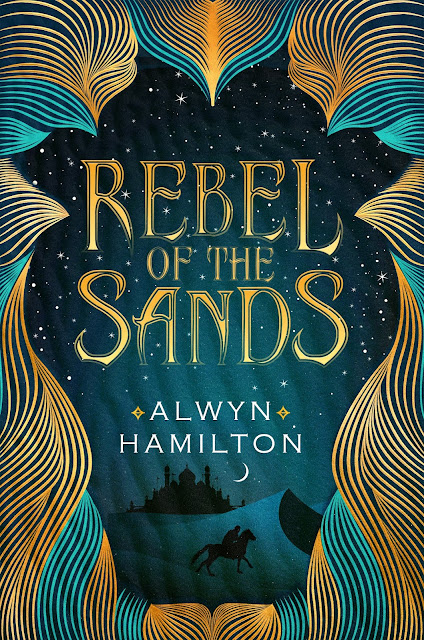 I was lucky enough to read the first two chapters of this book, after picking up a sample at YALC. All I can say is, it is brilliant!! And I can't wait to read more! But it looks like I'll have a little wait yet as it won't be out until February 2015! I'm ready to join the rebellion, how about you?

Summary
She’s more gunpowder than girl—and the fate of the desert lies in her hands.
Mortals rule the desert nation of Miraji, but mystical beasts still roam the wild and barren wastes, and rumor has it that somewhere, djinni still practice their magic. But there's nothing mystical or magical about Dustwalk, the dead-end town that Amani can't wait to escape from.
Destined to wind up "wed or dead," Amani’s counting on her sharpshooting skills to get her out of Dustwalk. When she meets Jin, a mysterious and devastatingly handsome foreigner, in a shooting contest, she figures he’s the perfect escape route. But in all her years spent dreaming of leaving home, she never imagined she'd gallop away on a mythical horse, fleeing the murderous Sultan's army, with a fugitive who's wanted for treason. And she'd never have predicted she'd fall in love with him...or that he'd help her unlock the powerful truth of who she really is.

Email ThisBlogThis!Share to TwitterShare to FacebookShare to Pinterest
Labels: alwyn hamilton, cover reveal rebel of the sands, faber and faber