In The Unlikely Event by Judy Blume 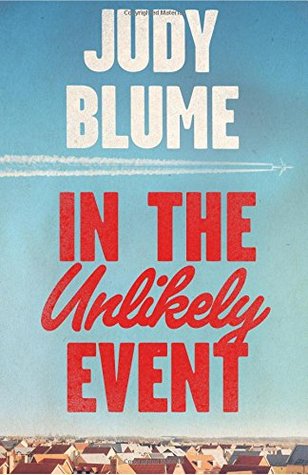 Even now she can't decide. She thinks about flipping a coin. Heads she goes, tails she stays. But isn't indecisiveness an early sign of mental illness? Didn't she cover a story about that a few years ago? Or is it that she conflicted? Conflicted is better than indecisive Why is she thinking this way?

Published by Picador in June 2015

When a series of passenger airplanes crashed in Elizabeth, New Jersey within a three-month period in 1951–1952, Judy Blume was a teenager. “These events have lingered in my mind ever since,” says Blume. “It was a crazy time. We were witnessing things that were incomprehensible to us as teenagers. Was it sabotage? An alien invasion? No one knew, and people were understandably terrified.” Against this background, Blume uses her imagination to bring us the lives of three generations of families, friends, and strangers, who will be profoundly affected by these events, either directly or indirectly. But life goes on and Blume digs deep into her characters—we see them coping not only with grief but with first love, estranged parents, difficult friendships, familial obligations, divorce, career ambitions, a grandparent’s love, a widower’s hope, and everything in between. . . .
****
I didn't grow up reading Judy Blume books. In fact, I've never read a single one until now. I was determined to read her latest and I'm so glad I did. It has definitely made me curious enough to want to read the rest of her novels.
In The Unlikely Event is a book that can't be rushed. At 400 pages and jam packed with characters, with their stories being told through multiple points of view, you need to take you time to get your head around it and work out who is related to whom. There are lots of stories that must be told and the book can be confusing at times, but worth the effort in order to get the full picture.
The book deals with fictional characters during a real life event. In 1952, three passenger planes actually crashed within three months of each other in the town of Elizabeth, where Judy Blume grew up. So the author had a real understanding and knowledge of the events that occurred. It sounds too coincidental for three planes to crash in the same place in such a short space of time, but that's just what it was - an unfortunate coincidence.
Blume expertly weaves the stories of the town folk together, showing how their lives dramatically changed after the accidents. It appears that no one was left unscarred by what they witnessed.
I love the way the story is written. Blume has really brought the fifties alive in this book with such detailed writing and I got a real sense of how it felt to live during that era. There are a lot of characters to learn about and sometimes I found myself a little confused, but they each play an important part in the story.
The main character is Mira, a fifteen year Jewish girl, living with her single mother, and grandmother. Mira is stronger than her family realise and has to deal with a lot of issues that many girls her age would have struggled with.
This is a dark story with lots of morbidity, but one that needs to be read. A truly moving tale    while beautifully written.