Return to The Secret Garden by Holly Webb 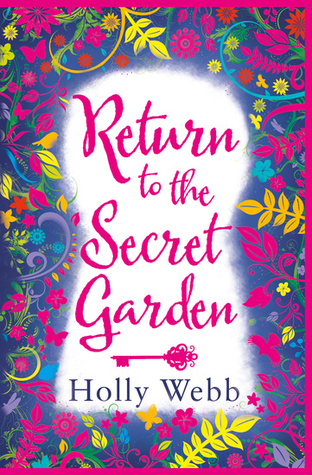 The children marched down the street in a crocodile, and only one of them looked back. The others didn't turn, because they didn't need to. There was nothing to look back for. Everything they owned was with them - a few clothes, here and there a battered shapeless stuffed toy. Each of them carried a paper parcel, and a gas mask, and that was all they had.

Summary
It's 1939 and a group of children have been evacuated to Misselthwaite Hall. Emmie is far from happy to have been separated from her cat and sent to a huge old mansion. But soon she starts discovering the secrets of the house - a boy crying at night, a diary written by a girl named Mary and a garden. A very secret garden...
****
Reviewed by Vivienne Dacosta

I can't believe I'm admitting to this - I have never read The Secret Garden. How bad is that? I mean, it a children's classic and one day I hope to get around to reading it. I vaguely know the story and the characters as  it is often talked about. I definitely watched snippets of the film. Did the fact, that I hadn't ever read it, spoil my enjoyment of Return to the Secret Garden? Most certainly not.
I will read anything that Holly Webb writes. She is one of my favourite children's authors. She writes with such a classical voice, I couldn't have thought of anyone more suitable to write this sequel.
This book is set during the Second World War and you get a great sense of what life was like for a child during that era. The fear of the unknown as the children are shipped off to the countryside. How quickly the children settle into their new lives,with such a vast area of explore.
Even though I haven't read The Secret Garden, this book reminded me of other childhood classics that I have read, such as Tom's Midnight Garden and Five Children and It. The descriptions are detailed and stunning, really bringing the garden to life. I loved how the characters from the first book were woven into this version, making it a beautiful companion novel.
The characters are wonderful. Emmie is a brilliant main character, with echoing elements of Mary's nature. My favourite thread of the book has to be about Lucy, the stray cat, who really captured my heart.
An ideal Christmas present for anyone that loves the feel of a classical tale. The magic of the secret garden is reignited, leaving the reader truly enchanted.
at November 10, 2015