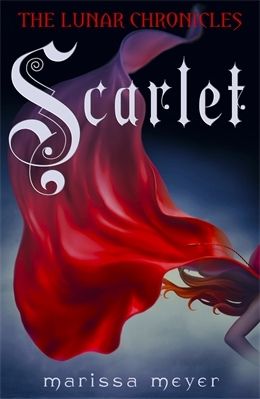 THIS IS NOT THE FAIRY TALE YOU REMEMBER. BUT IT’S ONE YOU WON’T FORGET.
Published by Puffin in January 2013
Pages - 452
Summary
Scarlet Benoit’s grandmother is missing. The police have closed her case. The only person Scarlet can turn to is Wolf, a street fighter she does not trust, but they are drawn to each other.
Meanwhile, in New Beijing, Cinder will become the Commonwealth’s most wanted fugitive – when she breaks out of prison to stay one step ahead of vicious Queen Levana.
As Scarlet and Wolf expose one mystery, they encounter Cinder and a new one unravels. Together they must challenge the evil queen who will stop at nothing to make Prince Kai her husband, her king, her prisoner…
*****
Reviewed by Isabella Samuels

The second of the Lunar Chronicles is my personal favourite of the series. It sees the world of 126 T.E expand to a futuristic Europe with  deeper interplay of all our favourite Grimm fairy-tales.
Scarlet is a feistier character than Cinder, though that might seem hard to believe, she is resilient and unfalteringly loyal to her missing grandmother – yet she is not naïve, though fiercely attracted to Wolf she never forgets the potential threat he poses to her own safety.
We also meet Captain Thorne in this episode, a character beloved by fans for his comedic value. Cinder, when escaping prison, takes him with her, useful to her solely for his stolen spaceship and two hands. As the story progresses and drama builds, we adore him for the light relief he brings, from his dubious romantic advice and sarcastic flirtation to his loveable narcissism.
The deadly plague and the fear of Lunars and Queen Levana really come to the centre of the story in Scarlet, still somehow suspiciously and mysteriously linked. The bigger issues in Scarlet help Meyer to gather momentum for the remainder of the series.
The plot is stronger, grittier, in Scarlet than in Cinder, after reading the second book, the epic first seems just to be a pale warm up.  Written in true Grimm style, sparing no prisoners, Scarlet is a spell-binding expansion of the series.
at November 05, 2015