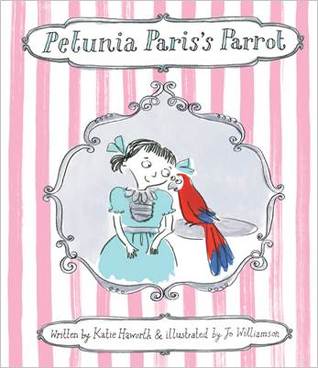 Every year before Petunia Paris's birthday, Petunia's parents asked her what present she would like.
Her fifth birthday was no different. Petunia Paris thought. And thought. And thought.
She already had a swimming pool. That was last year's present.
She already had a city of toys. That was from the year before.
She also had a thousand dresses, her own personal library and a bicycle with its own chauffeur.

Summary From Templar Publishing
Petunia Paris has everything she could possibly want, from a swimming pool to a bicycle with its very own chauffeur. When she requests a parrot for her fifth birthday, a parrot is what she gets.
The problem is, Petunia Paris's Parrot does NOT do what Petunia Paris wants it to do…
Petunia Paris's Parrot is a hilarious story with a valuable lesson to be learned, brought to life with charming illustrations from Jo Williamson.
****
Review by Liss Norton
This is an unusual picture book because it's full of long words, many of them beginning with the letter P, which will need to be explained to children. The illustration style is unusual, too. It reminds me of Edward Ardizzone's work, though on many of the pages the only colour is either pink or turquoise, with everything else drawn in grey and white. The parrot is very bright, though, and the last, fold-out page is bursting with colour. Keep an eye out for the long-suffering butler. I particularly liked seeing him dressed as a clown.
This is a satisfying story. Petunia has pretty well everything a girl could wish for – including a swimming pool and her own personal library. Thinking of something she wants for her birthday isn't easy, but she decides on a parrot. Unfortunately it's not the talker she was hoping for. No matter what Petunia does, she can't get the parrot to talk… until she asks him nicely what he wants. The parrot wants to go home to Peru. The story ends happily, of course, though I'm not giving away the ending here!


Although I think the story's suitable for boys and girls, the front cover with its pink stripes and the pink illustrations inside will make it completely unappealing to boys. This is a shame because there's no reason why boys shouldn't enjoy it just as much as girls.