During YALC I was lucky enough to be invited to attend the press junket with two of America's most popular YA authors,  David Levithan and Nina Lacour, who have recently published a joint collaboration, You Know Me Well. 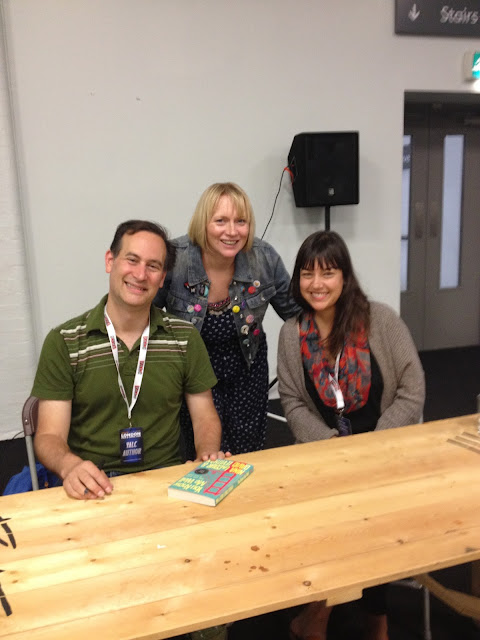 David Levithan has written a few collaborations over the years and recently became a New York Times Bestseller with his book, Every Day. By day he is an editor for Scholastic.
Nina LaCour is author of numerous award winning books. She used to be a high school teacher but now writes full time.

Here are some of the snippets from the press junket.

On writing:
David: Loves writing collaborations. Although isn't much of a planner. He writes stories in order to discover the story. David never knows what his will characters will do next.

Nina: Never collaborated before, so this was a new experience. She likes to write in scenes rather than in order. Tends to collect the vignettes when she has enough and put them in some kind of order, where she can then fill in the blanks.

On writing the characters  alternatively:
D: You have to go with what the other author decides when working collaboratively. It's almost like throwing the baton to your partner. David had a habit of changing things up with Nina.
N: They both intuitively knew each other's characters, so understood where they needed to go. Although the best things happened when they were caught off guard. Both authors wanted to deconstruct the he said, she said, style of writing.

On how the collaboration came about:
D: During a book convention. David knew he wanted to write a gay/lesbian novel. Loved Nina's books. Also has a good sense of who might be a good collaboration. Asked Nina immediately and she was blown away.
With his previous collaboration with Andrea Cremer it took an hour for the collaboration to come about. She mentioned David working with her on her blog, he sent her a chapter and basically threw the gauntlet at her.

On dream collaborations:
D: Libba Bray. This will happen, just waiting on the right time. David edited Beauty Queens for Libba Bray, so already knows how she writes.

On writing with music:
D: David blasts music but doesn't have specific songs he likes to listen to. He could be listening to Bon Iver one minute and finds it instantly shifts into Britney Spears. Nothing quicker to shift you out of a zone. Rachel Cohn can't listen to music at all when writing, even though she loves it a lot.
N: Nina likes to listen to the same song over and over again. The lyrics tend to fade but it keeps you in the zone. 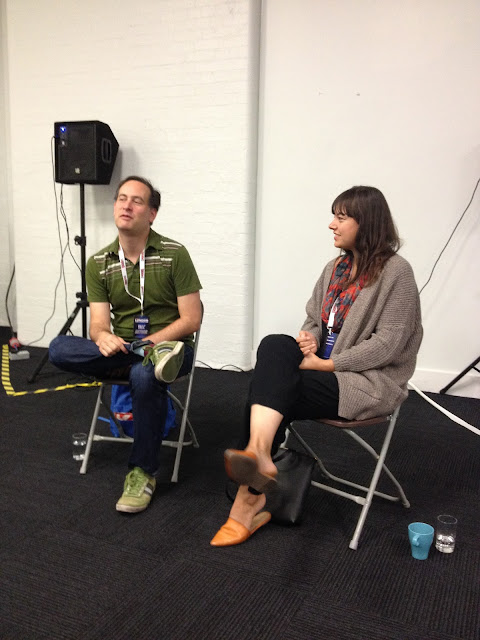 On writing a sequel to You Know Me Well:
N: Nina has yet to return to any book she has written previously. However there is a clear next stage for the main characters in their journey, so who knows.
D: Some stories you know you can go back to. With Dash and Lily it felt right. So never say never.

On favourite character to write:
N: A really loud character named Brad.
D: Ryan. Because David has been on both sides of the situation that Ryan is in, he found it easier to write from experience. He took the character places he didn't think he would go. There is a very fine line between friendship and romance.

On book recommendations:
N:  A Little Life by Hanya Yangihara.
D: David was surprised by Nina's choice as it appears to be a love/hate book. Jandy Nelson describes A Little Life as "having someone bash you in the face with the hard cover". David recommended Nicola Yoon's The Sun Is Also a Star, which isn't out yet. David also recommended Kids of Appetite by David Arnold and My Name is Lucy Barton by Elizabeth Strout.

On ideal cosplay characters:
N: The original Catwoman
D: Ross from Friends or maybe an M&M with just a brown T shirt.

On what Pride means to them:
N: Pride has come a long way. Looking in the past at how hard people had to work to be accepted for the their sexuality. How they were often disowned by their families, yet now teenagers can be who they want to be. They have an innocent entitlement inherited from the people who strived so hard in the past. They can now celebrate history, individuality and love.
D: Pride alters depending on the situation and circumstances. Reading the chapter from You Know Me So Well, which is set in a nightclub, meant something different before and after the Pulse Nightclub shootings in Orlando. Pride has to adapt to circumstances.
When they wrote the last chapter, same sex marriage was finally legalised and it was overwhelming. 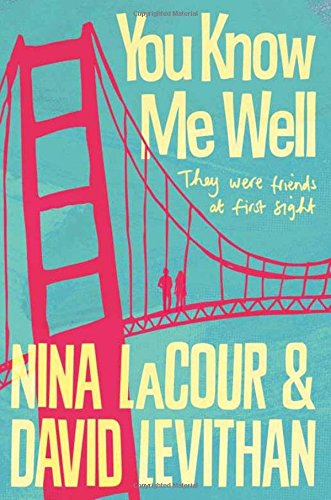 Summary
Who knows you well? Your best friend? Your boyfriend or girlfriend? A stranger you meet on a crazy night? No one, really?
Mark and Kate have sat next to each other for an entire year, but have never spoken. For whatever reason, their paths outside of class have never crossed.
That is until Kate spots Mark miles away from home, out in the city for a wild, unexpected night. Kate is lost, having just run away from a chance to finally meet the girl she has been in love with from afar. Mark, meanwhile, is in love with his best friend Ryan, who may or may not feel the same way.
When Kate and Mark meet up, little do they know how important they will become to each other -- and how, in a very short time, they will know each other better than any of the people who are supposed to know them more.
To find out more about David Levithan:
Twitter / Website
To find out more about Nina LaCour:
Twitter / Website