I've been meaning to post this for the last couple of weeks, but with all the Halloween posts and then catch up posts for last week, I didn't get time. Basically WHSmith sent me a box of goodies, featuring all of the Autumn Zoella Book Club bundle. It was like Christmas in my house! 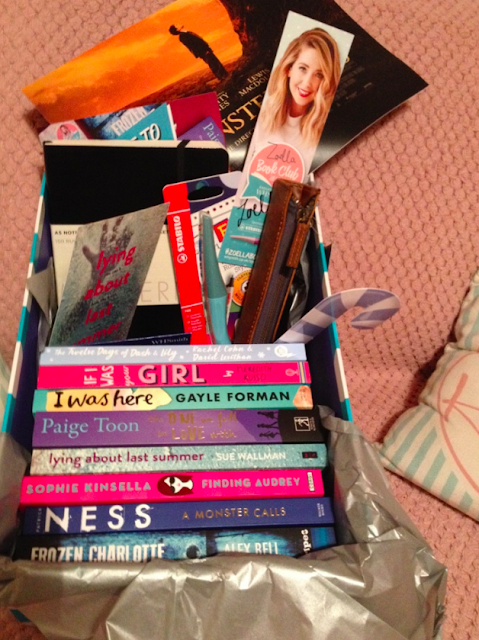 Not only did they send me the eight books, which I will talk about in a moment, but they also sent me some amazing goodies including a notebook, pencil case, pen as well as a voucher to buy even more books! I am so grateful to WHSmith for their generosity. 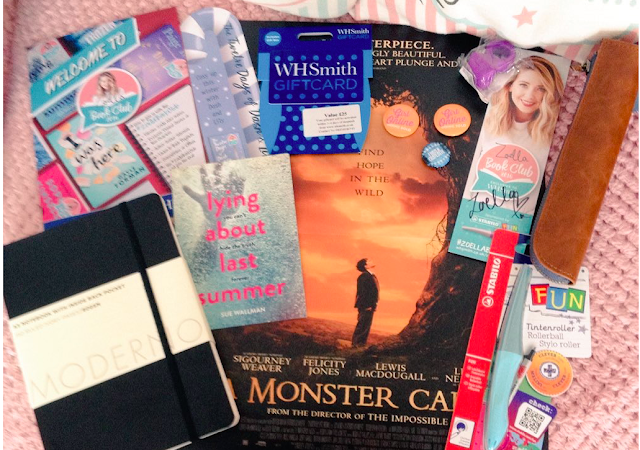 Apologies if you have already read about these on other people's blogs, but I really wanted to  give you my opinion on the choices.  So let's look at the books chosen individually. 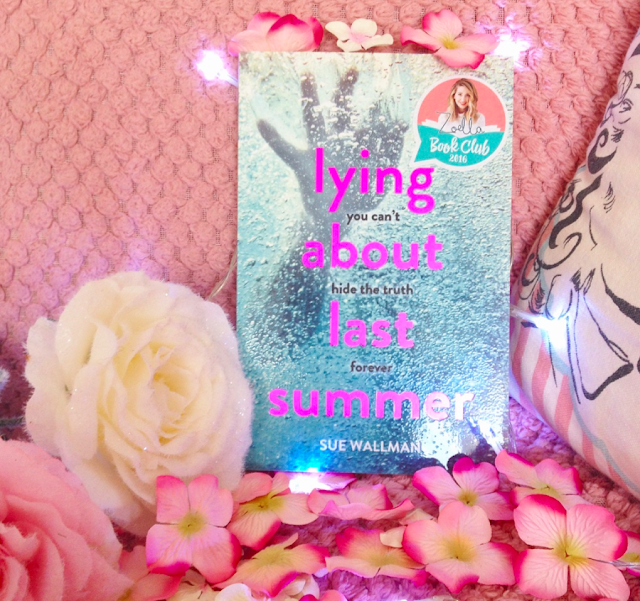 1) Lying About Last Summer by Sue Wallman
I am beyond thrilled that this book has been chosen to be part of the collection. Sue is a friend of mine. We are both SCBWI members and attended the first ever Book Bound course back in 2014. Sue was struggling to get  a book published back then, so to see how far she has come since, really gives me hope that I may one day reach the same heights. Sue has worked so hard, she totally deserves to be on this list. The book was reviewed on my blog by fellow Book Bound debut author, Sarah Baker, when it came out. You can read her review here.

Summary
The story centres around a girl called Skye, who is sent to a camp for troubled teenagers after her sister dies in an accident. However, once she is at the camp she starts receiving text messages from someone pretending to be her dead sister. 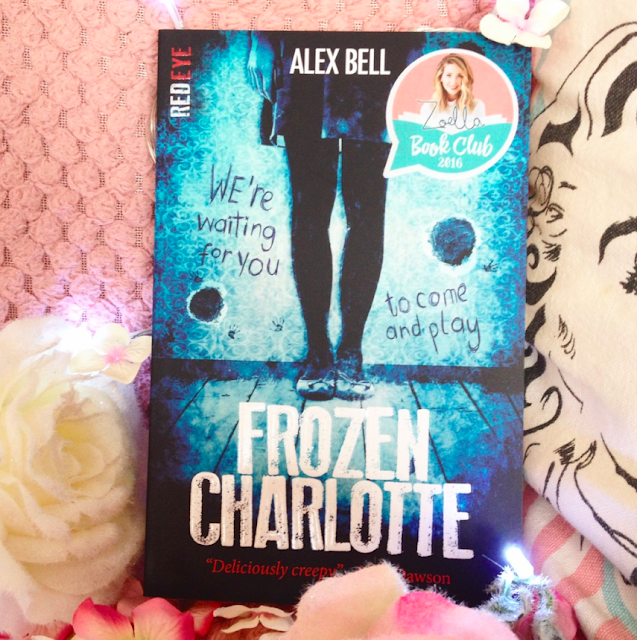 2) Frozen Charlotte by Alex Bell
I felt this was an unusual choice as I don't imagine Zoella being one for horror, but I'm so glad it has been included. I do think books that scare the pants off you are on the rise and this book most definitely does scare you. I've nearly finished reading it and I can confirm it gives you nightmares. All those little hands and teeth pinching and biting you. *shudders*
Not one to be read alone at night, but perfect for this time of year.

Summary
We're waiting for you to come and play. Dunvegan School for Girls has been closed for many years. Converted into a family home, the teachers and students are long gone. But they left something behind...Sophie arrives at the old schoolhouse to spend the summer with her cousins. Brooding Cameron with his scarred hand, strange Lilias with a fear of bones and Piper, who seems just a bit too good to be true. And then there's her other cousin. The girl with a room full of antique dolls. The girl that shouldn't be there. The girl that died. 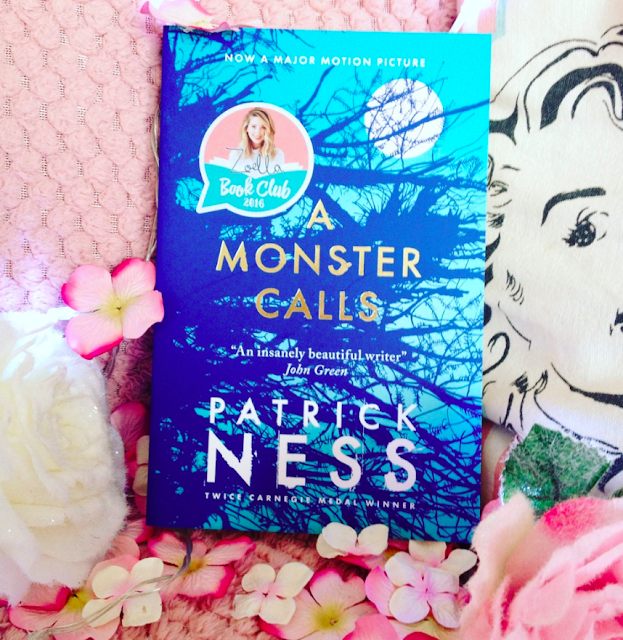 3) A Monster Calls by Patrick Ness
Ah, the token male of the group. Being totally honest, I think this book is a perfect choice for the bundle, because it is so darn beautiful. Sad to the point that you will weep buckets, but beautiful. I don't imagine it's any coincidence that the book has been chosen at the same time the film is released, but who cares! It really is a stunning read. I reviewed it when it first came out, back in  2010. You can read my review here.

Summary
The monster showed up after midnight. As they do.
But it isn’t the monster Conor’s been expecting. He’s been expecting the one from his nightmare, the one he’s had nearly every night since his mother started her treatments, the one with the darkness and the wind and the screaming…
This monster is something different, though. Something ancient, something wild. And it wants the most dangerous thing of all from Conor.
It wants the truth. 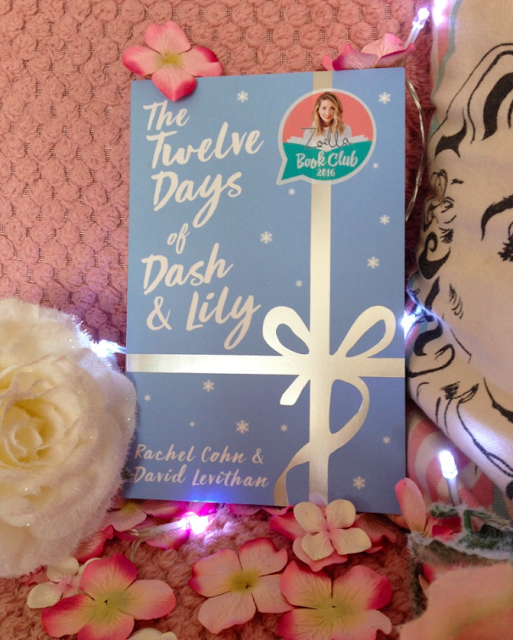 4) The Twelve Days of Dash & Lily by Rachel Cohn and David Levithan
This is probably the one I'm most excited to read and will probably by the next one I tackle. I loved the first book, Dash & Lily's Book of Dares which I read back in 2012. It was one of those books I was so annoyed with myself that I hadn't read sooner. I won't make this mistake again. Perfect for the festive season which will soon be upon us and so lovely to see these two authors writing together again.

Summary
New York Times bestselling authors Rachel Cohn and David Levithan are back with a life-affirming Christmas romance starring Dash and Lily.
Dash and Lily have had a tough year since readers first watched the couple fall in love. Lily’s beloved grandfather suffered a heart attack, and his difficult road to recovery has taken a major toll on her typically sunny disposition.
With only twelve days left until Christmas—Lily’s favorite time of the year—Dash, Lily’s brother Langston, and their closest friends take Manhattan by storm to help Lily recapture the holiday magic of New York City in December.
Told in alternating chapters, The Twelve Days of Dash & Lilyreunites two beloved characters and is bound to be a Christmas favorite, season after season. 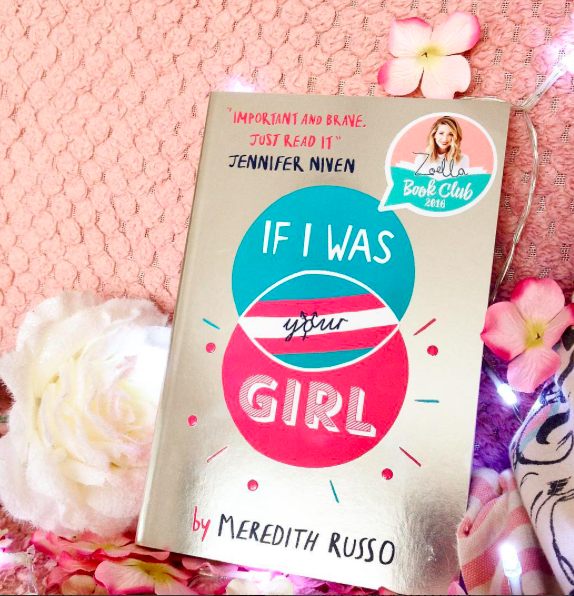 5) If I Was A Girl by Meredith Russo
This is one of those books I wouldn't have expected to be on the list, but I am thrilled it is. The main character in the book is transgender and there are so few stories around like this available. A lot of people still don't understand trans women and men and I really hope this will pave the way to better understanding. This is about accepting people for who they really are. This is a book that everyone needs to read.

Summary
Amanda Hardy is the new girl at school.
Like everyone else, all she wants is to make friends and fit in. But Amanda is holding back. Even from Grant, the guy she's falling in love with.
Amanda has a secret.
At her old school, she used to be called Andrew. And secrets always have a way of getting out.
A book about loving yourself and being loved for who you really are. 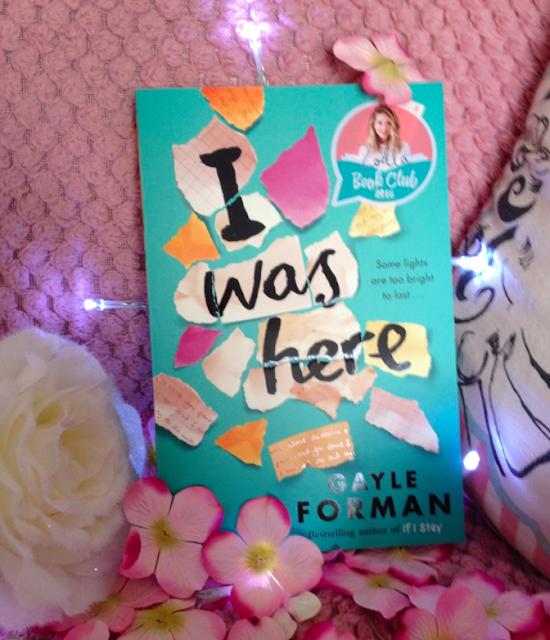 6) I Was Here by Gayle Foreman
I didn't realise I'd read this book until I looked up the summary and remembered the cover. Oh boy are you all in big trouble. This is an absolute weeper! Dealing with assisted suicide, it really is quite a difficult and emotionally draining book to read, but one that needs to be read. Not my favourite Gayle Foreman book, but still a good one. You can read my review here.

Summary
When her best friend Meg drinks a bottle of industrial-strength cleaner alone in a motel room, Cody is understandably shocked and devastated. She and Meg shared everything—so how was there no warning? But when Cody travels to Meg’s college town to pack up the belongings left behind, she discovers that there’s a lot that Meg never told her. About her old roommates, the sort of people Cody never would have met in her dead-end small town in Washington. About Ben McAllister, the boy with a guitar and a sneer, who broke Meg’s heart. And about an encrypted computer file that Cody can’t open—until she does, and suddenly everything Cody thought she knew about her best friend’s death gets thrown into question. 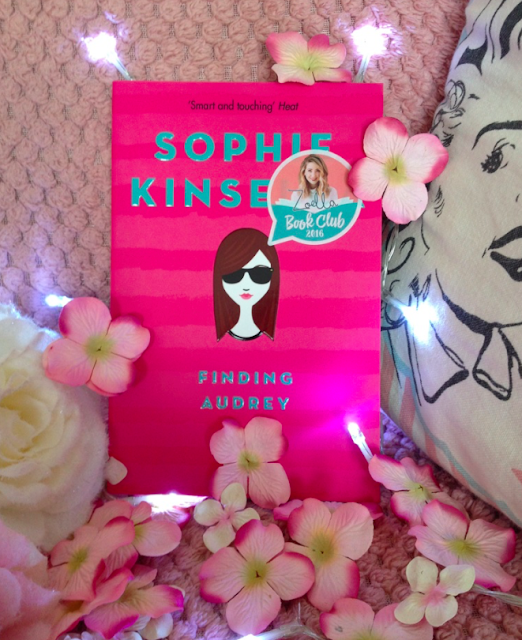 7) Finding Audrey by Sophie Kinsella
I started to read this book when it originally came out but never finished. Not that I didn't like it, I just got sidetracked by other books. So this time, I'm determined to read it. The main character, Audrey, suffers with an anxiety disorder, which Zoella herself suffered with and has been quite public about how she was affected. So it comes at no surprise that this book was chosen. I hope it helps other teenagers who struggle with anxiety too.

Summary
An anxiety disorder disrupts fourteen-year-old Audrey’s daily life. She has been making slow but steady progress with Dr. Sarah, but when Audrey meets Linus, her brother’s gaming teammate, she is energized. She connects with him. Audrey can talk through her fears with Linus in a way she’s never been able to do with anyone before. As their friendship deepens and her recovery gains momentum, a sweet romantic connection develops, one that helps not just Audrey but also her entire family. 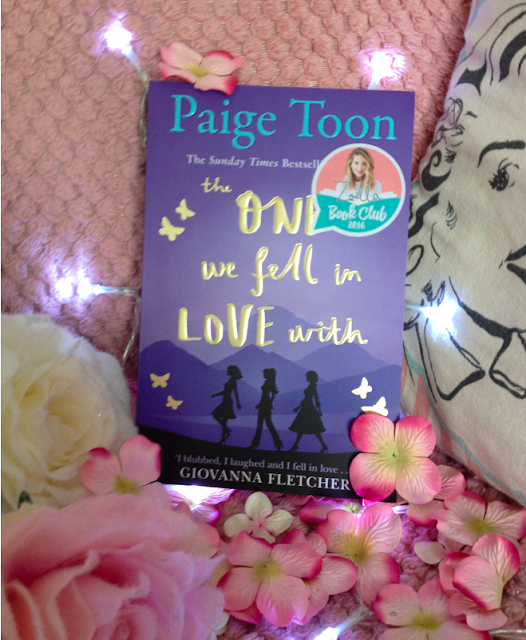 8) The One We Fell In Love With by Paige Toon
This is the book I know least about. This is also the most adult of all the books chosen. Paige Toon is loved by millions of readers, so I'm pleased to see her on this list, encouraging the younger generation to pick up her books. Though, I'm surprised one of her YA novels wasn't chosen instead. I feel like I've missed out on the Paige Toon fan club, so I am hoping to love this book as much as everyone else and develop a life long love of her books.

Summary
Phoebe is caught between a rock and a hard place. Settle down and get married, or return to the French Alps to pursue her passion?Eliza is in love with someone who is no longer hers. In fact, he probably never was… And her dream of becoming a musician seems to be spiralling down the drain.Rose is out of a job and out of a boyfriend. To make matters worse, she’s been forced to move back in with her mother…But these very different girls have one thing in common. Angus. The one they fell in love with… 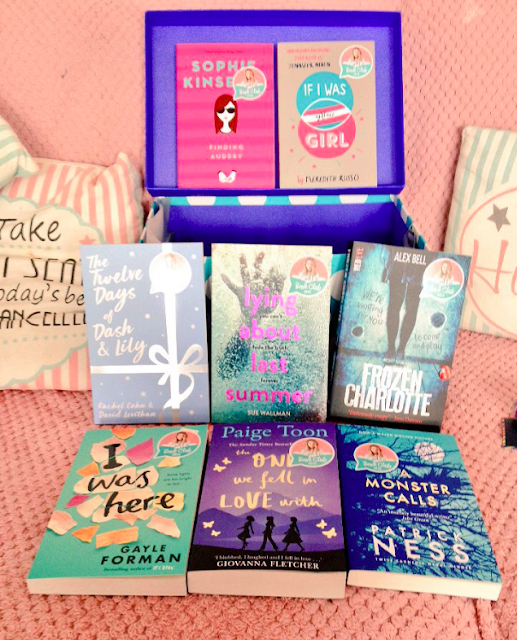 On the whole I'm really rather impressed with this set of books. The first set seemed a little lacking in diversity to me. Firstly there were no male authors and secondly the books seemed to be all very similar in genre. Though to be honest, they would be the type of books I would expect to see Zoella reading. However it did feel like they were missing out on such a diverse range of very strong YA literacy available.
I do think that they have taken the comments aired about the last bundle of books on board and given us a wider range of choice this time round.  Firstly we have a male author, albeit a little predictable in choice, but we also have a transgender author which I was so pleased to find included. It would have been nice to see a more diverse set of authors, including people of colour, as well as different ethnic backgrounds. But then, I look at Zoella  and realise that the books chosen are ones that would represent the way she reads. Is she more into chick lit than diversity and feminism? Perhaps WHSmith might like to consider allowing Emma Watson to bring out a similar style bundle which would definitely highlight areas that everyone feels this set of books are missing.
I do feel that the Zoella Book Club is doing a good thing. It's getting more teenagers reading and anything that gets kids to pick up books is worthing having. It also helps to bridge the gap for teenagers ready to move onto adult books, by including fiction from both age ranges.
I want to thank WHSmith again for sending me these books and I look forward to sharing more of my reviews with you over the coming weeks.

Email ThisBlogThis!Share to TwitterShare to FacebookShare to Pinterest
Labels: #zoellabookclub, a monster calls, finding audrey, frozen charlotte, i was here, if i was a girl, lying about last summer, the one we fell in love with, the twelve days of dash and lily, whsmith, zoella