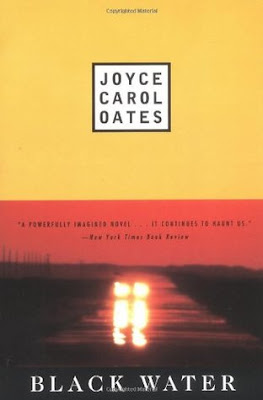 This book is based loosely around the true story of the death of Mary Jo Kapechne, often referred to as the Chappaquiddick incident. Kelly Kelleher is American's version of a Grade A student all through life, with her heart set on a career in politics. While attending a Fourth of July party at her best friend's house in Maine, she is introduced to the Senator. He is quite taken with her and requests her company back at his hotel on the mainland. Convinced that this will help further her career, Kelly accompanies the Senator as he drives back. The only problem is he's been heavily drinking all afternoon, yet thinks nothing of driving. An accident occurs in the deep, sewage ridden marshlands, after they take a wrong turn and Kelly dies.

I'm not spoiling the story by telling you that Kelly dies, because you are made aware of this on the very first page. The plot is told in a really unique way, where you weave your way through the tragic accident, in between scenes where you learn about Kelly's life.

I read this book purposefully because it used a radial narrative. If you are unaware what a radial narrative is, it is where the central story runs in a circular motion in the middle with historical spikes leading up to the event poke out from the main story. It is a clever narrative pattern, that is a refreshing change from the normal three act structure.

All through the book, the author mirrors the emotions of the character through the setting. From the noise from the cicadas to the ebb and flow of the waves, Kelly's emotions match every scene.

The book is a compelling read, yet also quite emotionally draining. Especially as you witness the struggles Kelly faces to keep breathing underwater, after the Senator saves himself and leaves her for dead. Time and time again, you return to her last minutes alive, always hoping the story will turn out differently to how you have been told from the very beginning.

I was impressed by how the author took a real event and made it her own. An excellent example of using a different narrative structure.