The Originals by Cat Patrick 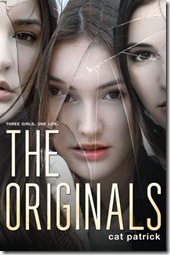 My part is first half.
I go to Student Government, Chemistry, Trigonometry, Psychology, and History at school, then do the rest of the day at home. I maintain that Mom was in a mood when she made assignments this year – math and science are definitely not my best subjects. When I reminded her of this, she said,’That’s exactly why you’re doing first half.’
Pages – 304
Published by Egmont in May 2013
Goodreads Summary
17-year-olds Lizzie, Ella, and Betsey Best grew up as identical triplets... until they discovered a shocking family secret. They're actually closer than sisters, they're clones. Hiding from a government agency that would expose them, the Best family appears to consist of a single mother with one daughter named Elizabeth. Lizzie, Ella, and Betsey take turns going to school, attending social engagements, and a group mind-set has always been a de facto part of life...
Then Lizzie meets Sean Kelly, a guy who seems to see into her very soul. As their relationship develops, Lizzie realizes that she's not a carbon copy of her sisters; she's an individual with unique dreams and desires, and digging deeper into her background, Lizzie begins to dismantle the delicate balance of an unusual family that only science could have created.
*******
Cat Patrick always has the most amazing story ideas when it comes to writing fiction. Possibly inspired by her own twins, she has created an original story  centring around a trio of clones, all living the same life. It sounds freakishly weird I know, but you have to read it to believe it.  I was completely intrigued by the whole idea behind the book.
The story is told in present tense from the point of view of Lizzie. Even though the girls are supposed to be the same person, their differences are evident early on in the book. I think the author did a fantastic job at portraying each girl individually so that they stood apart from each other. Ella is the happiest out of the three; she is content to carry on living as they are. As well as being the happiest,she is also the brainiest and at times appears to be the naïve one. Betsey is the calm, thoughtful and logical one; if they were just sisters, I would place her as the oldest. This leaves Lizzie, who comes across as more defiant; she wants her own life more than either of the others and you feel her desperation for change. They are living the life of one person – each attending school for a certain part of the day. The thought of trying to be one person when you are all so different must be draining and as the girls head towards being an adult, they are beginning to realise they don’t want to live this life anymore.
I didn’t like Lizzie’s mum at all. I felt suffocated by the way she treated the girls. Anyone would have broken free from such tight control. To the point where she even monitors their heartbeat alongside following them with a GPS system is just wrong. It isn’t until Lizzie falls for the charms of the gorgeous Sean, that Lizzie and her sisters begin to realise just how wrong their lives are. They start to doubt their mother’s decisions for their lives.
The book leaves doubts in your mind. As the mother of identical twins I know how important it is to nurture their differences, but when they were younger, I have to put my hand up at being guilty of occasionally dressing them the same. If I had that time again, I would definitely do it differently.  I felt this book emphasized the extremes that twins and triplets can be treated like in reality.
The book heads off on a fast pace and you find yourself totally engrossed in the story.  The beginning and the middle of the book really drew me in and I was desperate to find out how it would end. My  only little niggle with the book is that events at the end were not shown in detail, which left the climax a little flat. I really wanted to see what happened between Maggie and the girl’s mum, but unfortunately the information was relayed second hand.  I can see how this would have been difficult to show due to the story being told from the perspective of Lizzie.
Apart from that I really enjoyed the book and I’m intrigued to read more YA dealing with cloning. If you like your sci-fi a little bit different, then I would highly recommend reading this book.
at May 20, 2013