On Wednesday the 29th of July, I was kindly asked to attend the Orion/Indigo Summer Ball. A fair amount of  squeeing occurred on receipt of this invitation, especially when I realised how many fantastic Orion authors would be attending.
The event was held at the October Gallery in Bloomsbury, which I actually struggled to find. After nearly sending myself into a severe asthma attack after climbing 175 stairs at the Russel Square station, I then found myself stranded in the centre of London.  At one point, I was ready to throw my bag on the floor and throw a major toddler tantrum in protest of not knowing where I needed to go. It wasn't until I saw Jenny from Wondrous Reads, my guardian angel for an instant moment, that I sighed with relief at realising I had passed the building several times.
On arrival at the October Gallery, Jenny and I were joined by a delightful lady, whom I only realised five minutes after the conversation began was Lucy Coats, who I had spoken to several times concerning the ABBA online literary festival.
Once inside the gallery, the lovely Nina Rogers led us out into the courtyard where we were served drinks and canapes. The courtyard soon began to fill up and I found myself mingling with lots of fantastic authors as well as bloggers, such as Liz and Mark de Jager from My Favourite Books and Darren from Bookzone.
I also got to meet some AMAZING authors too. 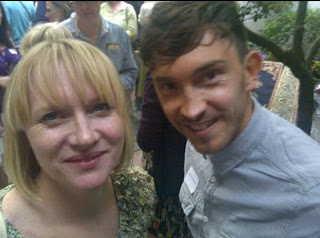 Standing next to me in the photo, is James Dawson, a new author for Orion who will be published under their new imprint Indigo in February next year. His book is called Hollow Pike and has that Twin Peaks feel to it. James is very entertaining and I could have listened to him talk all night. I can't wait to read Hollow Pike. 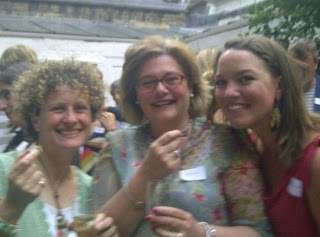 I also got to see Liz Kessler again, who is pictured here with Lucy Coats and Kate Christer, one of the lovely  publicists from Orion. 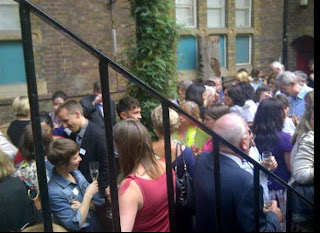 For a little while during the evening, I got to sit and talk to Caroline Lawrence, author of the Western Mysteries. As we were chatting, I took a picture looking down on the crowded courtyard. To the right of the picture, you will see Cliff Mcnish in a blue shirt. I spoke to him earlier in the evening, was amazed to find him so relaxed and really funny, especially as he writes horror books for a living. 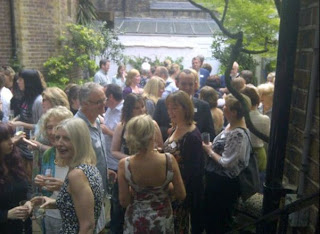 Another picture from above, showing Fiona Kennedy, publisher of Orion Children's books and Indigo can be seen in the black and white dress in the left hand corner. She made a wonderful speech thanking all her staff and authors for another successful year at Orion Children's Books. She gave special mentions to Annabel Pitcher ( My Sister Lives On The Mantelpiece) Marcus Sedgwick ( White Crow) and Lauren St John (Dead Man's Cove) who had all had a very successful year with their books. 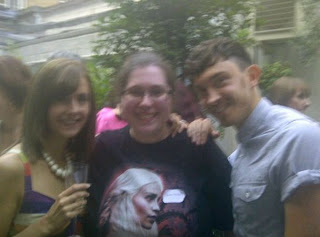 Apologies for the quality of this picture, but  I took it on my phone.
Here we have Annabel Pitcher, Jenny Davies from Wondrous Reads and James Dawson.
I had the most AMAZING time at the Orion/Indigo Summer Ball and came away feeling inspired to finish my own writing. The authors I met were so kind and supportive and I wish them all well with their new publications. Thank you to Nina and Kate for allowing me to attend such an exciting event.
Here are two more posts about the Orion/Indigo party.
http://www.orionbooks.co.uk/news/the-orion-children-s-book-summer-party
http://bookwitch.wordpress.com/2011/06/30/orions-party/
at July 08, 2011