Being British we don't really have any reason to celebrate the 4th of July, yet I always feel like I am missing out on something amazing. I usually feel the same around Thanksgiving too.  This year, Lauren Ace at Macmillan Children's Books came to the rescue and invited myself and other bloggers to spend Independence Day at their offices, chatting to Josephine Angelini via Skype. How could I say no! 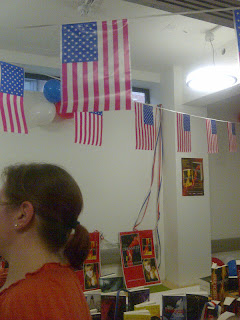 The boardroom had been decorated in all things American. 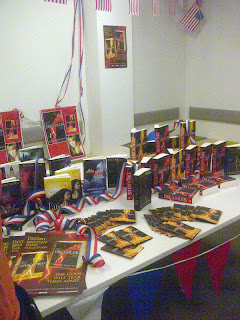 With a gorgeous centre display of Josephine Angelini's books, Starcrossed and her new publication Dreamless, which was due to be published the next day. 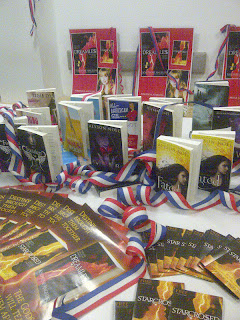 The lovely ladies from Macmillan also put out a selection of other books they have published recently too. 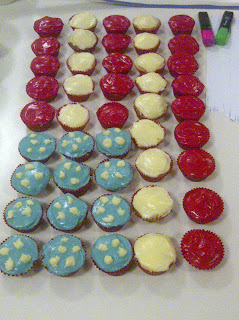 They also laid out some scrumptious food. Check out this display of cupcakes as the American flag. 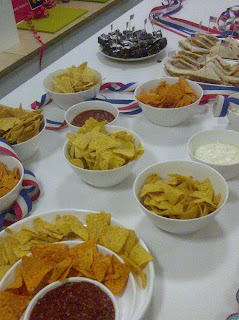 There were plenty of seats available around the sides while we waited for Josephine to log in. 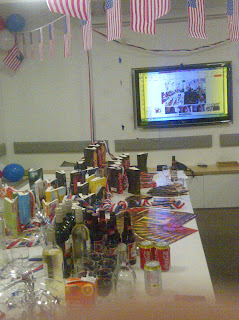 I'm sorry the quality of this picture is really bad, but yes, that is Josephine Angelini, live in her hotel room via Skype. 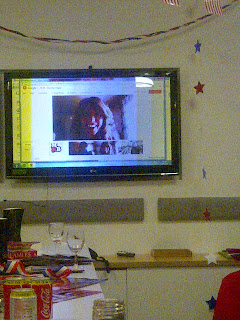 I'm afraid I got a little tongue tied and author struck while enjoying the interview with Josie. I put Josie in the same bracket as Amy Plum, so I generally get  a little lost for words. Thankfully everyone wasn't as quiet as I was and Josie had plenty of questions to answer. Here are some of the things she told us.
Josie mentioned that she got the inspiration for the Starcrossed series from the Illead. Her copy was sitting next to Romeo and Juliet  and her mind wondered into whether this was where her story should come from.
Josie tends to write in two shifts. She normally writes two pages at night and then sleeps on them before editing them the next day. She tries to write every day. She found she didn't need to do a lot of research for the series as she knew the stories quite well from her childhood.
Josie confirmed that Goddess would be the last book in the series  and she read us a little passage from it. She hasn't ruled out bringing the characters back at a later date.
Her next novel will be based on The Crucible!
We tried to coax her over to England, but she told us it was in the hands of Macmillan Children's Books.
One of her favourite books while growing up was Mists of Avalon by Maria Zimmer Bradley which I will admit to reading two thirds of. It is a huge book of 1000 pages and takes a lot of time to get through, but I really would like to go back and finish it.
If the books were ever made into films, Josie would like unknown actors and actresses to play the parts just because apart from the fact that it will ruin their lives, they will become known as the characters!
It was really lovely to get to talk to Josephine Angelini - thanks to Macmillan Children's Books for inviting  me to a fabulous event.
at July 17, 2012