Emil and the Detectives by Erich Kastner 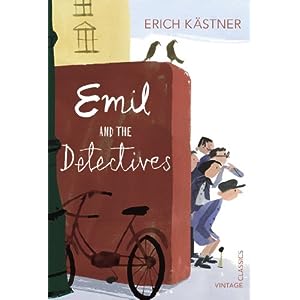 
‘Now then, Emil,’ Mrs Tischbein said, ‘just carry in that jug of hot water for me, will you.’ She picked up one jug and a little blue bowl of liquid camomile shampoo, and hurried out of the kitchen into the front room. Emil took his jug and followed her.


Originally published in 1929, Erich Kastner's engaging tale has delighted readers young and old, for generations. It's Emil's first train ride alone and he's excited, and a little nervous. On the train, his fellow passengers are impressed with how polite and grown-up Emil is, and the man in the bowler hat offers him some chocolate, but Emil keeps checking his coat pocket, where he's pinned the money that he is taking to his grandmother. Soon, though, Emil finds himself getting sleepy . . . and the next thing he knows, the man in the bowler hat is gone and so is the money! With the help of some new friends Emil becomes a detective and tracks the thief through the city.
*********


I first read ‘Emil and the Detectives’ as a child of about 8 or 9. I borrowed a copy from Teignmouth library and was immediately drawn into this quaint but un-sanitised child’s world of adventure.


It is very much a boys’ world but I don’t think I thought about that at the time as I had two older brothers and knew they had more freedom than me. However, revisiting the book as an adult, I am far more aware of this gender divide. Despite this, the women are strong characters. As well as Emil’s mother, there is his aunt and grandmother who also wield power in this boy’s world. As for Pony, his cousin, she is a Tomboy who doesn’t know she’s a Tomboy. She has a new bike and also longs for adventure but she knows she must help out at home and be indoors at a certain time, unlike her male counterparts.


I think the book should be read in the context it was written. It is set in Berlin in the inter-war period, 1928, just before the rise of Hitler. It is the Berlin of Cabaret, protests and demonstrations, recession and inflation, the threat of something more sinister than anyone could imagine looming on the horizon. This book is all the more poignant for reading it now with hindsight, especially with the knowledge that Erich Kastner had his subsequent books burned by the Nazis while he watched on.


And yet this book has universal themes of childhood. Adults are often grumpy and yet they say that children these days are so rude. It’s about gangs and the importance of belonging and camaraderie. It’s about single-parenthood. Money is a struggle and Emil’s mother, a widow, works hard to provide for her son so that he can go to school and have the same as his peers. Emil appreciates his mother, and though he is adamant he is not a prig, he would hate to disappoint her in any way. ‘He had to try really hard to be good, as hard as some people try to give up sweets, or going to the pictures.’


But what is so warming about the book, aside from its quirky characters, is the adventure. A pre-cursor of ‘The Famous Five’ and ‘Secret Seven’, ‘Emil and the Detectives’ was one of the first books to have child detectives. This is child power!


I love the narrator asides and the simple line drawings with captions. Some of the language is quaint (‘gay’, ‘right-O’, ‘worse luck’, ‘jolly decent’) but this in no way detracts from the book which has a timeless energy of its own.