Setting The Scene with John Dickinson

Today on Setting The Scene I have John Dickinson, the fabulous author of Muddle and Win which is published tomorrow by David Fickling Books, an imprint of Random House Children's Books.

Right. There are no pictures, so you’ll have to imagine this.
(Which is, after all, the point.)
Our hero is a little devil down in Hell. His name is Muddlespot. He gets sent up to enter the mind of a girl called Sally Jones. Sally is the sort of person who is top of her class, always does her homework, keeps her room tidy, helps her mother, helps everyone and is liked by everybody. Muddlespot has to persuade her to be different.
But Sally is no sap. Muddlespot finds his job harder than he thought possible. And when – finally – he starts to make some headway with her, a heavyweight hero-angel called Windleberry gets sent down from Heaven to oppose him. The story is about how the three of them get along together. And the places in it are Heaven, Hell and the Human Mind.
You’ll see why I haven’t any holiday snaps to show you.
A lot of people think of Heaven as a city – a Jerusalem in the sky. Down in Hell there seems to be a city too, called Pandemonium. (At least, according to Milton there is, and what’s good enough for Milton is good enough for me.)
As for the human mind – well, we know that inside Sally’s mind there’s going to be Muddlespot and Windleberry and, OK, Sally herself, all arguing with each other about what Sally is going to do - eat that muffin or not, for example. They live in it, as if it were a house. They look out at the world through Sally’s eyes. This sort of idea comes up regularly in slapstick cartoons and comic strips.
Milton with slapstick. That’s where I wanted the story to be. And in this case the common link between Heaven, Hell and the Human Mind was going to be architecture.
Let’s imagine Heaven as a city, then. What would this city be like? Think of all the most wonderful building humans have ever made – the Taj Mahal, Versailles, Windsor Castle, and the latest prestige skyscraper going up in the City with fountains and fruit orchards in the foyer. Now exaggerate everything, in all directions. Think of lightness and air. Imagine walls and towers that look down from impossible heights onto the world below. Vast halls and chambers through which the angels bustle on business they think is very important. There would be music, all the time. How are orders passed from angel to angel? In harmony, of course. Thrones would be made of rose-petals. Tables of polished rainwater…
‘Polished rainwater?’ said one of my editors. ‘I can’t imagine it!’ Try a little harder.
Hell next. It’s got to be pretty heat-proof for one thing, so let’s make it out of brass. Nice and shiny, with ominous stains here and there due to the habitual pastimes of the inhabitants. It’s got to feel threatening too. There should be lots of spikes everywhere, like in Prague or some city out of the Arabian Nights. You’ve got to feel those buildings looming over you, unseen eyes watching you.
There need to be shadows. Doors gape like mouths to swallow you (so decorate them with teeth). Carvings writhe along the buidings, showing the sort of scenes that when you look at them closely you really wish you hadn’t…
‘Down’ should be an important concept here. In a normal city, and probably also in Heaven, the bigger the cheese you are, the higher up the hill you live. In Hell it’s got to be the other way around. The big guys live at the bottom. I’ve been to only one city where the same is true, and that’s La Paz in Bolivia, which is built on a mountainside at high altitude, so that it’s definitely more comfortable to live lower down the slope. My Pandemonium is not consciously based on La Paz, but it’s possible that the memory of that curious, upside-down city lingered with me as I began to describe the place where Muddlespot was born.
(That’s not ‘born’ as we understand it, of course. I don’t think Hell runs to maternity wards.)
As for the human mind. This is harder. But we know that brains are massively complicated things, so we’re going to have to imagine quite a lot of it. If they’re like houses, then there’d be room after room after room, corridor after corridor, stairs, galleries… Where do all the facts live? All that French Grammar that we’re so good at? Where do all the ideas come from? The nightmares? What do we do with thoughts we don’t want to think? There must be a dark dungeon somewhere, with cages where suppressed thoughts howl in frustration, sending their voices echoing distantly down the corridors of our mind.
The inner architecture must express the outer personality. Sally’s mind would be ordered, light, calm, geometric, symmetric and very clear. A lot of it would be made of translucent crystal. Other bits would look like the naves of cathedrals…
Woah! Woah-woah-woah! Light? Crystal? Cathedrals… Isn’t this all sounding a bit like the way we imagined Heaven? Maybe it is. So are we running out of ideas, beginning to repeat ourselves? Tremble, writer.
But maybe it doesn’t matter. Maybe it’s right that her mind should be a bit like our Heaven. It just shows how much ground our poor hero, poor bewildered Muddlespot, has to make up. (When we get into the mind of Sally’s sister, by contrast, it can be a darker, more chaotic place where a solitary guardian angel works desperately in a seedy office by the light of an anglepoise lamp. Contrasts are useful like that. They can make a point better than any superlative.)
And of course, whichever mind you’re in, there has to be a way that leads to Heaven. And one that goes to the other place. As if to say (without of course actually saying it) that Heaven and Hell are both in the mind.
That too is the point.
Maybe. 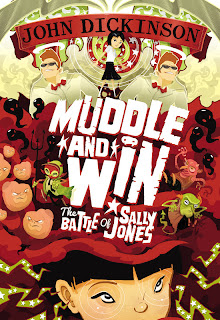 To find out more about John Dickinson:
Website: http://www.john-dickinson.net/index.html
at August 29, 2012