A Day In The Life of Liz Kessler

I love to get being nosy and checking out what writers actually do all day, so I was over the moon that Liz Kessler agreed to write an honest post about her day. As part of The Land of the Midnight Sun blog tour, the fifth book in the Emily Windsnap books, here is Liz telling us all about her day. 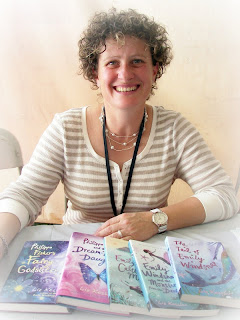 I bet anyone who’s ever been asked to write a ‘Day in the Life’ article has the same question go through their head. Do I write about a real day in my life or a day in the life that I aspire to and that part of me pretends I actually have?
I’m opting for the former. So if you have romantic visions of writers sitting in their attics from dawn till dusk as the muse guides them smoothly through their day, quill pen and creativity flowing, I suggest you look away now.
Actually, the attic bit is true. My study is in a beautiful attic room, with a view of the sea and gorgeous little nooks and crannies, and that is where I start my day. 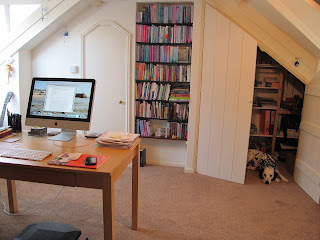 ‘My study, complete with dalmatian muse.’
Actually, I start it at the kettle. First cup of tea in hand, dog patted and cuddled, I sneak off to my little haven at the top of the house around 8 am(ish).
What I’d love to say now is that I sit working solidly on my book and emerge an hour later with my first thousand words written. Actually, to be fair, this sometimes is the case. When I’m on the first draft of a book, usually the words do flow quite fast and I resent most things that get in the way of me spending time with them.
But at the stage I am at right now – which is the very early thoughts about one book, the final edits of another and the publicity plans for a third – things are not so clear cut.
So, cup of tea (Earl Grey) sorted, the first job of the day – as any writer knows – is to check emails, Facebook and Twitter. I’ll reply to anything urgent, spend a good ten minutes trying to think of a witty & erudite tweet (and usually fail) and then start to think about a second cup of tea. 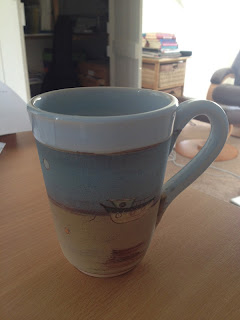 ‘My fave mug’
By the time I have made my next cuppa and have woken up the partner and the dog, had a chat on the doorstep with the neighbours/postie/passing holidaymakers who stop and coo at next door’s cat, possibly given my mum a quick call and (occasionally) got dressed, it somehow seems to be getting on for 10 o’ clock. (See I nearly said 9 there, but I told you I was being honest.)
Which means it’s time to check emails, facebook, twitter again.
Somewhere around this point, I’ll realise I’ve been up for over two hours and not achieved anything, and any time now, I’ll decide I really need to get to work.
I would dearly love to say that this is the point where I exclude every distraction, put the ‘Do Not Disturb’ sign on my door, and get creating. But it’s not to be. Not yet. There is still Stuff To Do before I can allow myself that luxury. All good. All related to be being a writer. None of it actually writing.
Here is an example of my Stuff To Do, all taken from the last week…
* Working with my publicist to plan some publicity events for my new book, which comes out in a month.
* Working with my web designer to create the ‘Emily Windsnap Friendship Festival’.  * Reading through the US page proofs of Emily Windsnap and the Land of the Midnight Sun and sending my comments back to my US editor. * Making a video of my recommended summer reads, for Amazon.com’s ‘Author Adventures’
* Visiting a local hotel run by friends of mine with my dog (the star of my new Early Reader, Poppy the Pirate Dog to give a talk to families staying at the hotel.
* Running a writing workshop for children as part of the Penzance Literary Festival. 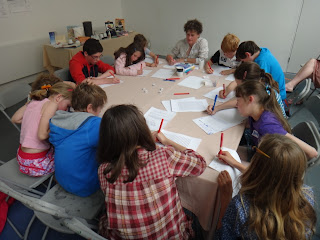 ‘The next generation of fabulous writers.’
* Making arrangements with another local festival, and with a local reading agency, to run more writing workshops for children.
* Writing an article for the local newspaper about Poppy the Pirate Dog.
* Um. Writing some guest blogs.
There is more, but you get the idea. The other thing I should mention is that I’m running a raffle for a local children’s hospice at the moment, so I’m putting about half my time into that as well.
All of which means, we’ve now got to about 4 pm. In fact, to be honest, it could be 4, but it could just as easily be 7 or 8 pm by now. I still haven’t done any actual writing – but I’m not too worried. I have come to trust that at these early stages, ideas are almost certainly beginning to form silently in the back of my mind. And I also know that once I get started, none of this admin will stand a chance, as all I’ll want to do is write. So sometime around now, whatever time that is, I’ll switch off my computer, make a long list of all the things I wanted to get round to doing but didn’t, and call it a day.
And unless it’s a beautifully sunny day and there are perfect waves (in which case most of the above gets abandoned to go surfing) or a beautifully sunny day and the sea is flat calm (in which case most of the above gets abandoned to go fishing or kayaking) or a beautifully sunny day and a friend puts a message on facebook saying ‘Anyone fancy the beach this afternoon?’ (in which case…well, it’s obvious what I’d do in this case) – then that’s pretty much how a Day in the Life of Liz Kessler goes. At the moment.
And now, at 9.29 am, I’m off to wake up the partner, cuddle the dog and have a cup of tea on the doorstep with my neighbour. 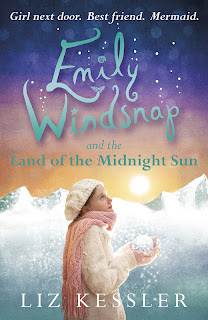 The Emily Windsnap books are all about friendship! We’re inviting young readers to join the Emily Windsnap Friendship Festival in September 2012 – go to www.lizkessler.co.uk to find out how to get involved and win!
The whole series has been given a set of gorgeous new covers! What do you think?

Now how would you like to win a copy of the fifth book in the series 'The Land of the Midnight Sun'?
Well thanks to the lovely ladies at Orion Children's Books I have three copies to give away. This is a UK only competition, so please do not enter if you live outside the UK as your entry will be invalid.

a Rafflecopter giveaway
at September 12, 2012

Email ThisBlogThis!Share to TwitterShare to FacebookShare to Pinterest
Labels: a day in the life, emily windsnap, liz kessler