North of Nowhere by Liz Kessler 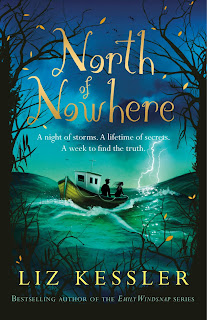 Pages 229
Published by Orion Children's Books on 17th January 2013
I need to write it all down. That's the only way I'll believe it's true.
Spring half-term of Year Eight. All those incredible, impossible things. Did they really happen? I've tried a hundred times to tell myself that they couldn't have done, that none of it is possible.
Amazon Summary
When Mia's grandfather disappears, Mia and her mother immediately rush down to stay with her grandmother and offer support. With no friends and no internet access in the little seaside village where her grandparents live, Mia is bored and lonely--until she makes friends with Dee, the daughter of a fisherman from a nearby island, and Peter, who is on holiday with his parents. But Mia's grandad is still missing, and actually meeting face to face with Dee is proving surprisingly difficult. Mia becomes determined to find out what's going on, but the truth is much more mysterious than she ever imagined...
********
Liz Kessler has done it again.
North of Nowhere seems to have collected the essence of excellent time travel stories and weaved them together to make a modern, believable book with a strong British feel to it that is a ruddy good read.
There is the growing and long lasting friendship I so loved in Tom's Midnight Garden and the detailed planning of time travel to save the future from the past that was such a major part of the Back To The Future films. There is a heartbreaking moment too, which brought tears to my eyes as I remembered something similar that happened to Nicholas Lyndhurst in Goodnight Sweetheart.
Liz captured the mind of the pre teen so accurately that she could almost have been sat in my house listening to my two in conversation.
I also thought the book handled the difficulties that often do occur because of the generation gap extremely well. I loved the way Mia was beginning to realise that perhaps raising her voice and arguing wasn't really going to get her anywhere. My girls are just beginning to adopt the 'Be Nice' strategy.
I loved that the story was told from multiple points of view, as well as using other methods to communicate such as letters and the diary.
I was not expecting the ending at all. I can’t say what I wasn’t expecting or I’ll give it away, but I’ll just say the ending took me by surprise!
I thought North of Nowhere was stunning! Mindblowing!  I can’t say much more to express how much I loved it because this book insists on secrecy otherwise the surprise will be spoilt.
So in the end all I really need to say is - READ IT! It is awesome!