Graphic novel artwork & adaptation by HyeKyung Baek
Yen Press 2012
240 pages
Summary from GoodReads
The Infernal Devices is the story of Tessa Gray, a sixteen-year-old American girl travelling alone to Victorian London who runs afoul of the city's sordid supernatural underworld. Rescued by the Shadowhunters of the London Institute, Tessa quickly finds herself caught up in an intrigue that may very well destroy her new friends - including the two enigmatic young men, Jem and Will, who have taken her under their wing... 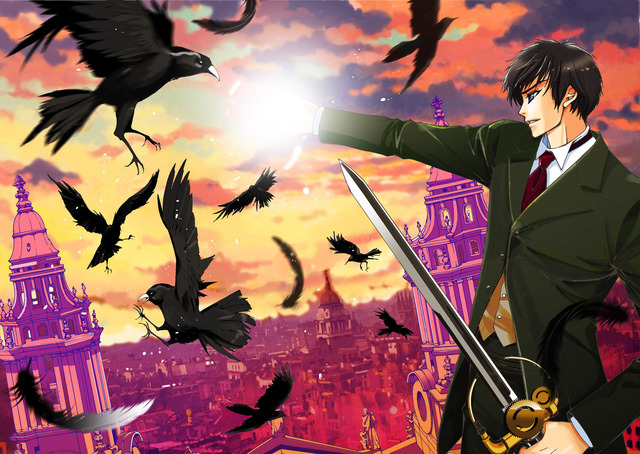 Reviewed by K. M. Lockwood
This manga adaptation of a prequel to Cassandra Clare’s Mortal Instruments series is both stylish and popular in appeal. There are a few full colour images but it is largely presented in dramatic black and white. South Korean artist HyeKyung Baek’s combination of stylised Victoriana and distinctly Asiatic drawings make an intriguing Steampunk effect.
The bare essence of the plot is briskly conveyed through dialogue and action. There are supernatural creatures and science fiction elements as well as deceit and secrets. All good stuff for this genre.
From to time, the artist uses chibis. These are diminutive, almost childlike, versions of the main characters which show heightened emotions. Anime and manga fans will already know this technique –it was only because I had a little book on how to draw anime style that I knew! Occasionally, I found the order of scenes hard to follow – but then, she didn’t really design it for me.
Nonetheless, the layout of some pages is striking and artistic, and I suspect many girls will find two of the male characters cool and appealing, as well as rooting for our brave heroine. Younger children could be frightened by some of the creatures and events but the use of monochrome does make it less gory than it might otherwise be. My one criticism of the production values is that the soft back cover is prone to curling and wouldn’t last long in a teenager’s bag.
This book would be ideal for teenage fans of Steampunk who like a fast-paced adventure in an alternative 19th century London but who would be put off by large amounts of text.
at January 13, 2013