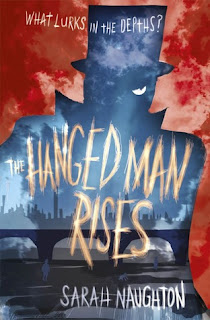 Pages - 235
Published by Simon and Schuster in February 2013
The boy sat on the end of the jetty, skimming oyster shells across the water. It was too choppy to get many bounces but occasionally a shell would strike the dredger, moored further out, with a satisfying clang.  He didn't even bother to prise open the next one before he threw it. The thought of slurping out its slick grey innards, still quivering, made him queasy. A person could get heartily sick of oysters, and Sammy often wishes his father had been a cattle drover or a cheesemonger. Anything but an oyster farmer.
Goodreads Summary
When their parents are killed in a fire, Titus Adams and his little sister Hannah are left to fend for themselves in the cruel and squalid slums of Victorian London. Taking shelter with his friend and saviour, Inspector Pilbury, Titus should feel safe. But though the inspector has just caught and hung a notorious child-murderer, the murders haven't stopped. Now everyone is a suspect, even the inspector himself, and unless Titus can find a way to end the killings, he will lose all that is dear to him.
For this evil cannot be contained, even by death.
******
The Hanged Man Rises is a rather dark tale that drags you into the rough and dangerous parts of Victorian London. A child killer is on the loose and everyone is scared. The first chapter was really rather scary. I struggled reading it as any mother would do. You feel chilled to the bone, by the events that unfold.
Titus and Hannah are brilliant characters. Titus is such a strong and brave boy and deal with the death of his parents and his new position as his sister’s guardian. He will do anything to protect her, even if it means hurting her.
The story continues in it dark tone all the way through, with the arrival of some rather sinister characters that will make your skin crawl. I enjoyed reading the parts with Lilly in, who is a young girl with the power to speak to ghosts. It was brilliant to see a medium represented as having real skills instead of a charlatan, which is often the case with Victorian novels.  The story is quite fast paced all the way through, culminating in a rather dramatic ending. Sometimes I got a little lost in the narrative and found myself rereading passages, as I didn’t always understand what was going on. On reading it at a slower pace, this probably wouldn’t be an issue.
This book is recommended for 11 years +. Personally I would suggest it to older readers or young ones with excellent reading skills as the writing is quite mature at times and the content is often quite dark.
On the whole, this is a very promising debut, representing the darker side of Victorian London.