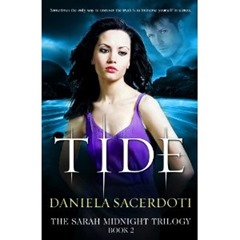 It was the first time that Sarah ever felt close to Morag Midnight, and the last time she saw her alive.
Pages - 416
Published by Black and White Publishing in February 2013
Amazon Summary
Sarah Midnight is no ordinary teenager. She is a demon hunter, caught up in one of the deadliest wars unknown to man. Orphaned at the age of sixteen, Sarah learned the family trade of hunting without her parents to guide her but under the watchful eye of her ‘cousin’, who was revealed to be Sean Hannay, no relative at all, but a dear friend of the real Harry Midnight. Now, in the exciting sequel to Dreams, the fight continues. Sarah and Sean may have defeated the Scottish Valaya, but the rest of the war still rages on, and Sarah, Sean, Nicholas and their companions must unearth the identity and location of the Enemy – the leader of the demons – before the world plunges into the Time of Demons once more. Their quest leads them to Sarah’s family home, the Midnight mansion in Islay, and there they discover horrible truths about the demon ruler, his plans, and Sarah’s own personal history. Along the way, Sarah must battle not only the demons but her hurt toward Sean and her feelings for the enigmatic Nicholas, who has plans of his own.
******
I do love a Daniela Sacerdoti book!
I think she is one of those authors who has really captured my interest over the last couple of years and is instantly on my Buy list.
That first line really draws you in. Your intrigue and imagination are both captured at once.
This is the second book in the Sarah Midnight Trilogy series and I  can assure you there is no second book syndrome in this book. Uh uh! This book introduces new characters, new settings and new turn of the page thrilling action and drama.
We finally get to meet Elise, Harry Midnight’s wife, who appeared briefly in the first book. On arrival her relationship with Sarah is relatively frosty. You keep thinking they will never ever become friends. Luckily as the book progresses, they begin to see the bigger picture and accept each one’s part in it. Nicholas had the most interesting character arc within this book and throws some unexpected punches into the story. Sarah changes a  lot in this book. You see her so much stronger and capable than she was in Dreams. She really accepts her destiny and grows into it.
We also get to see Sarah’s ancestral home, Midnight Hall, on the isle of Islay. This house could have stepped out of the pages of a Susan Hill ghost story, it was seriously spooky. Sarah learns so much more about her past while here and unanswered questions from Dreams are dealt with. We learn so much more about Sarah’s family and you get a glimpse of what Sarah could become if she isn’t careful.
The battle intensifies while on the island and the conclusion of the book is extremely dramatic. Sarah’s life takes an unscheduled turn towards another journey that is necessary to end this battle. By the end of the book I was left shell shocked and lost, desperate to find out what would happen next. Book 3 seems such a long way away!
The story is told from many viewpoints, some of which are in first person, while others in third. I struggled a little with that in Dreams, but recently there has been a trend within the YA market for more like this, so I  really enjoyed this style this time round.
Dani Sacerdoti really is an incredible writer. She knows how to bring every image to life. You don’t have to question any scene as you can see it easily in your head, as the descriptions flow easily off the page.
If you haven’t read a book by this author yet, you are seriously missing out. This is an excellent example of paranormal YA set in the UK.
at March 06, 2013