Setting the Scene with Alex Woolf

Today on blog I am pleased to welcome Alex Woolf on the day of publication of his new book, Soul Shadows. Alex has kindly written a post detailing the places where the book is set. 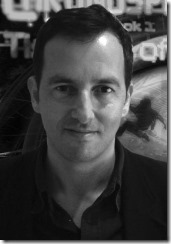 When I was planning my novel Soul Shadows, I decided to make the initial setting as ordinary as possible. The idea was that if the setting is familiar to readers, they’ll be able to imagine themselves there more easily, and this should hopefully make it more scary. The story therefore begins in an isolated cottage in the midst of some rather dull, flat countryside. It’s a long way from any major towns, with just a small village a few miles away serving as the nearest outpost of civilisation. The village can only be reached by traversing a rather spooky wood. What is more, the local phone mast is not working, so from the start of the novel, our protagonist is effectively cut off from the world. The setting may be ordinary, but in another way it most decidedly isn’t.
The wood is another important setting in the novel. I remember being very impressed by the wood in the film ‘Blair Witch Project’. The jerky, handheld camera shots were very effective at making a rather bland-seeming treescape appear unsettling. As the film goes on, you get the feeling that there literally is no end to the forest – that it has become their entire world. We don’t have so many enormous forests here in Britain, where you can wander for days without finding even a hut or a road. However, even small forests can be scary. I remember getting lost on Hampstead Heath as a kid. Woods can be very disorientating and deceptive, with familiar-seeming paths often leading you in the wrong direction. There are far too many hiding places where malevolent creatures can lurk. And they’re also full of strange, echoey sounds that may be birdcalls or branches in the wind, but could also be something spookier. 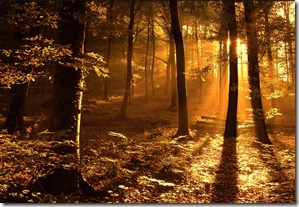 In short, a wood is the perfect setting for a horror story, particularly one in which the monsters are shadows. Indeed, it turns out in my book that the wood plays a fundamental role in the creation of the soul shadows. As we find out in Chapter 3, the light in this particular wood is different, and those who walk in it cast something that isn’t quite a shadow, but more like an evil version of their own souls. I’m quite careful in the way I talk about this light in the book. It’s pale yellow in colour and I usually describe it as sickly, sallow, anaemic or unhealthy. There is certainly nothing restful or picturesque about this wood or its light. Its purpose is to evoke fear of nature at its wildest and most mysterious. 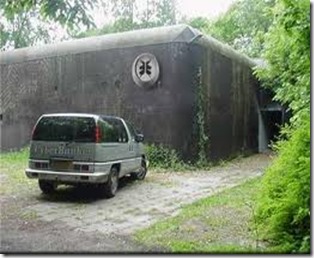 The other major setting in the book, in vivid contrast with the cottage and the wood, is the Facility. This is a secret scientific research establishment in the middle of the wood. It has a forbidding exterior of concrete walls, bunkers, barbed wire and security cameras, and an interior of gleaming metal surfaces, white walls, grey fitted carpets, high-tech equipment and a smell of newness and clinical efficiency. If the wood conjures fears of untamed, savage nature, the Facility will hopefully arouse anxieties about dangerous, uncontrolled science. It’s the collision of these two worlds that creates the monsters at the heart of Soul Shadows. 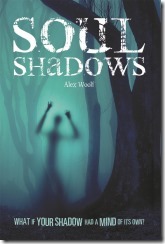 Soul Shadows is published today by Curious Fox.
Book Summary
Tying in with a recent trend for YA ‘fright-write’, Soul Shadows can be compared to Charlie Higson’s The Enemy or Darren Shan’s series, in its ability to grip and scare in equal measure. Exploring themes like mental health, childhood psychological abuse and the morality of science, SOUL SHADOWS offers much more than a one-dimensional scare story. Through his central character, Estelle, Alex Woolf places the reader right in the centre of the action – Estelle is an immediately gripping, though clearly damaged and vulnerable, personality, and it’s the reader’s connection with her from the first page that makes the unfolding horror feel so true, so raw.
In the world of SOUL SHADOWS, Woolf explores what would happen if your shadow could come to life, and, ultimately, try to take your life. It’s a sinister concept which leaves readers jumpy and, literally, scared of their own shadow. Set in an unspecified rural English landscape there is a feeling of extreme claustrophobia as Estelle, and her friend, Sandor, try to escape the world of shadows.
Author Bio:
Known for his successful sci-fi Chronosphere trilogy, Alex Woolf has been a full- time writer for over a decade after leaving his job as a non-fiction editor in 2001.
He lives in North London with his Italian wife and two children. In his spare time, he likes to play tennis, draw sharks, watch horror movies and teach himself the piano.
To find out more about Alex Woolf:
Twitter / Website / Facebook
at April 11, 2013