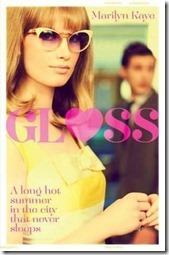 Sherry Ann Forrester knew the rules. Among the many social guidelines that had been drummed into her since childhood was this fixed decree: a lady maintained an air of composure, whatever the circumstances. And by the age of eighteen Sherry considered herself an expert at putting on the right face for every situation, no matter what she might be feeling.
Published by Macmillan Children’s Books in June 2013
Goodreads Summary
New York, 1963.
Fashion, music and attitudes are changing, and there's nowhere in in the world more exciting. Sherry, Donna, Allison and Pamela have each landed a dream internship at Gloss; America's number-one fashion magazine.
Each girl is trying to make her mark on New York and each finds herself thrown head-first into the buzzing world of celebrity, high-end fashion and gossip. But everything isn't as glamorous as it seems - secrets from the past threaten to shatter their dreams.
They're finding out that romance in New York is as unpredictable and thrilling as the city itself.
****
I thought it would make a refreshing change to read a YA book set in the sixties until I witnessed my feministic side roar into life. You have a group of young female interns at the magazine Gloss, who are on that well travelled road from child to adult. Within this book they face a hell of  a lot of sexism which I can understand was probably  normal behaviour in the early 60’s but as a reader it was frustrating to read. The way the girls get treated individually by some of the men is so annoying at times, I found myself shouting at the book. I didn’t realise how hard it was from women during the 60’s, I thought  society had been more liberated then. This book made me think of Sex In The City in the 60’s. Although Carrie and her friends would’ve kicked butt!
The story in told from multiple viewpoints all in third person, so you get to see each girl’s trials and tribulations as they take on a very male world publishing even though the magazines were aimed at women and young girls. Each girl is rather innocent when it comes to love and each falls for a different type of cad, quickly realising that there is more to life than settling down with a good husband. I didn’t understand why only one girl’s back story was written about more than the others and I would’ve liked to see each girl’s past in more detail.
As I continued to read the book, I couldn’t help but have a strong sense of The Brady Bunch. Sherry could actually have been Marsha Brady to begin with, until she morphed into a female journalist who would sit happily in modern day society.
I really enjoyed the setting. Considering I have a life long desire to visit New York, it had me drooling at the mention of famous restaurants, bars and tourist destinations. The author managed to contrast the glitzy side of life with the realistic one.
This book was an interesting read and itt does give a good view of how women were treated during the 60’s. It would probably appeal to the Gossip Girl fans who don’t mind dipping their toes into a bit of nostalgia.
at July 10, 2013