Memoirs of a Neurotic Zombie 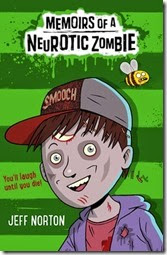 My name is Adam Meltzer. The last thing I remember was being stung by a bee while swinging at at robot-shaped piñata on my twelfth birthday. I as dead before the candy hit the ground.
Published by Faber and Faber in August 2014
Pages - 243
Memoirs of a Neurotic Zombie is narrated by the hilarious Adam Meltzer - pre-teen, worrywart, and now zombie. Adam's family gets the fright of their lives when he turns up at their door . . . three months after his funeral.
Soon Adam's back at school trying to fit in and not draw extra attention to himself, but when he sees his neighbour Ernesto transform into a chupacubra, and the beautiful Corina (Adam's number one mega-crush) turns out to be a (vegan) vampire, undead life is never going to be the same again.
****
From the moment I heard Jeff Norton reading aloud from this book, I knew I wanted to read it. I loved Adam instantly, which is a huge revelation for me to make as I’m usually the most anti-zombie blogger around. Seriously, normally, I would rather gargle bleach, than read a zombie book. Yet this one got me and I loved every word of it.
Adam is hilarious. Who would ever imagine a zombie that is a hygiene freak? He is a brilliant, funny and wonderful character and I loved getting to know him. Not to mention, his two rather quirky and unique sidekicks – Corina, a vegan vampire and Ernesto, a reluctant chupacubra. Every character’s trait contradicts who they really are.
This book is funny from the first word to the last and I was thoroughly entertained all the way through it. The way Adam’s character fit easily back into school, even though nearly everyone had been to his funeral, reminded me so much of Teen Wolf and how easily he was accepted.
If like myself, you’ve avoided zombies because you couldn’t see the point in them, then I highly recommend this book. I’m not saying I will be diving straight into another but if Jeff Norton writes a sequel, I will definitely read it.
at August 13, 2014