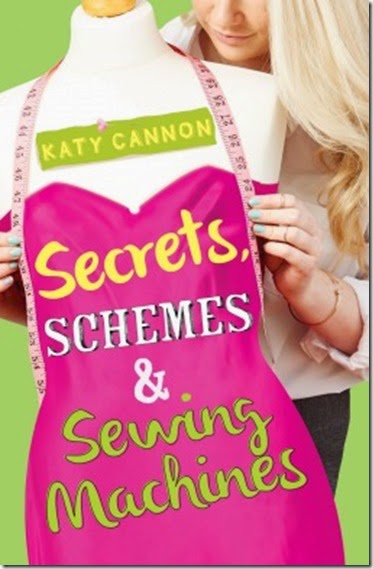 Sewing is more than just a hobby. Learning to sew means you can create outfits, accessories and looks knowing that no one else will ever have something exactly the same. You will always be unique and true to yourself. Whichever, pattern you follow, make it your own.
Published by Stripes Publishing in February 2015
Summary
Grace: This was supposed to be Grace’s starring year, until she opened the door to a family secret that changed everything. Now she’s stuck making costumes in Sewing Club and watching someone else play the lead role – unless she can find a way to win it back.
Connor: Far from home and exiled to a new school, all Connor wants is to keep a low profile and get through the year. But agreeing to help his step-dad out with the school play means he’s soon caught up in Grace’s schemes.
Grace had a plan for this year – and it didn’t involve learning to sew. But being out of the spotlight isn’t the disaster she imagined, even if Connor is convinced she’s still a diva extraordinaire. Can Grace prove she’s really changed and save the play from the sidelines, even though her family is coming apart at the seams?
******
I am a sucker for a school romance. And this one is simply gorgeous. I hadn’t read the previous book in the series, Love, Lies and Lemon Pies, but I can assure I will definitely be reading it soon. Although I didn’t feel like I needed to read it, as this book can be read easily as stand alone. I just want to go back now and find out more about Lottie and Mac, who are minor characters in this book, but their flourishing romance features heavily in the first book.
In this book we get to know Lottie’s friend, Grace better.  I have a feeling she wasn’t as lovely in the first book, as she is in this one. Grace had hoped to get the lead in the school play this year, but unfortunately she arrived to late for her audition and ended up being in charge of costumes for the show instead. When the new boy, Conner, writes her off as just a drama queen, Grace goes out of her way to prove him wrong, by throwing herself completely into the sewing club in order to help make the costumes for the show.
Grace is confident and sassy. She knows exactly what she wants and she won’t stop until she gets it. OK she is a bit of a diva, but I think every girl should have a diva-ness quality inside them. Connor can’t cope with drama, so it isn’t surprising that it takes a while for him to warm to Grace. It was interesting to watch the sparks of annoyance slowly alter to a chemical attraction as they realised how much they liked each other.
Being rather hooked on sewing, since recently purchasing a sewing machine, I  found I really enjoyed this book. I  loved all the sewing patterns that were included. I have had to bookmark each one so that I can hopefully soon have a go at making some of these things myself. It actually made me excited to sew!
On the whole, I thought  this was a charming school romance with some funny and warm characters. It looks closely at friendships and family dynamics, as well as a little romance. Definitely one that will appeal to the early teens.
at February 10, 2015