Pirates in Pyjamas By Caroline Crowe and Tom Knight 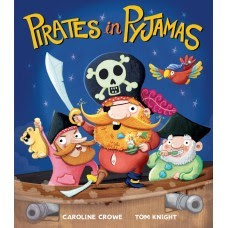 Do pirates wear pyjamas when it's time to say goodnight?
Do they have a skull and crossbones, are they stripy, black and white?
No! when pirates choose pyjamas they're not always what you'd think,
Some are purple, some are orange, some are yellow, green and pink!

Summary From Little Tiger Press
Have you ever wondered whether pirates wear pyjamas when it's time to say goodnight? Leap aboard the Leaky Parrot to find out! Captain Grotbeard and his crew love nothing better than bubble baths, jim-jams and pillow fights! So if you want to be a pirate you don't need a patch or sword – just grab your best pyjamas and a bed to climb aboard.
********
Review by Liss Norton
Who would have guessed that pirates do much the same as the rest of us when it's time for bed? They have a bath, put on their pyjamas, have pillow fights, drink their milk, then snuggle down under the covers.

The book is written in rhyme and is beautifully illustrated with colourful, cartoon-type pirates throughout. (Those of us of a certain age might spot the similarity between one of the pirates and a member of Captain Pugwash's crew.) The pirates' pyjamas are certainly a talking point – especially the pink, fluffy onesie – and there are lots of humorous, little touches to spot as you go on through the book. See if you can spot what Sneaky Pete's up to when the pirates are drinking their milk. Dominic, aged five, who I read the book to, was fascinated by the things sticking out of Captain Grotbeard's beard. He also loved the rat, but was disappointed that it didn't appear on every page. I have to admit that I was disappointed by that, too. We searched for it in every picture in the hope that it was hiding somewhere and I was left feeling that the illustrator had missed a trick here. That disappointment aside, though, I'd definitely recommend this book for pirate-lovers, especially those who don't like going to bed!