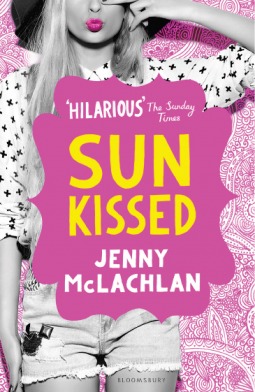 I'm hiding in my bedroom wardrobe with my sister's ex-boyfriend. This might be the worst decision I've ever made in my life.

Summary
Kat can't believe her family are sending her to Sweden for the summer. But without her friends, or even a phone signal, can Kat make it on her own?
In a land of saunas, nudity and summer sun, Kat soon realises she has nowhere to hide. It's time to embrace who she really is, underneath what she's been thinking people want her to be. Especially if she's going to win the heart of mega fit Swede Leo! Can Kat find her inner strength and prove she's got what it takes?
Kat soon finds that when you're surrounded by phosphorescence and wonder it's easy to sparkle. Or maybe that's what happens when you fall in love . Or maybe you only shine when you're true to yourself.
******
Reviewed by Vivienne Dacosta

Jenny McLachlin is fast becoming one of my favourite writers. This is only the second book in the Ladybirds series that I've read and I already love the characters dearly. I can hear you shouting at me, saying 'Even Pearl???' And yes! Yes! Even Pearl. I'm not sure how Pearl behaves in Love Bomb but in Sun Kissed we really see a different side to her. She shows that when needed she can be a true friend, albeit a little snarky, but she doesn't let Kat down.

In this book, Kat is shipped off to her aunt's house in Sweden after being caught with her sister's boyfriend in her wardrobe, which was a really stonking opening scene. Kat is as miserable as you would expect, especially when she discovers her aunt is taking her further afield to an island with no WIFI!!! I can see the teenagers reading the book and holding their breath at the very thought of that. Definitely every teenager's worst nightmare.

However the island does strange things to Kat. She realises there is more to life than Snapchatting her friends or updating her status. This is all helped by the attention of Leo. Only it seems that Leo has more than one admirer.

The island setting is simply gorgeous. Serene and simplistic, it is definitely a place I would love to visit. The author really brings it to life in her descriptions.

The characters in the book are awesome. I loved Otto! I thought the banter between Otto and Pearl was hilarious.

The book is extremely well paced and I was completely absorbed in the story from beginning to end. It even had me humming Abba songs to myself. A brilliant addition to the Ladybirdy series. I can't wait to read Pearl's story Star Struck in Spring next year.