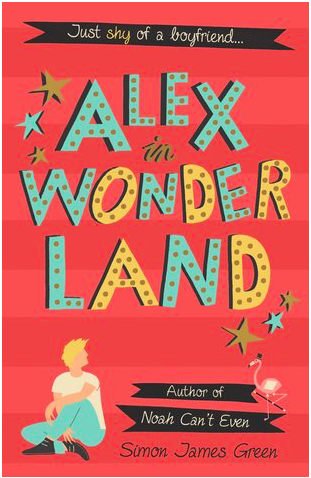 Oh my goodness! Where do I start on how blooming wonderful this book is! It has so many amazing qualities. If anyone thought Simon James Green might find it difficult to create a character as awesome as Noah, this book most certainly smashes that idea out of the water.
Alex is a warm hearted, romantic, yet terribly clumsy and awkward sixteen year old, who is struggling with the new relationship between his two best friends. Feeling left out, he envisages an empty summer without anything to do. All that changes when he accidentally lands a job at Wonderland, an extremely run down amusement arcade. With the job, comes a new set of friends and the possibility of a romance. However, it isn't all summer loving, as someone wants to see the end of Wonderland for good. Alex sets out with his new buddies to become a super sleuth and find out who is behind all the trouble.
I loved Alex! Alex has a unique voice, which makes him even outshine Noah. He's really confused about his feelings for Ben, his new work colleague, who just so happens to have a girlfriend. His clumsiness is the stuff of legends. The scene where he nearly knocks himself out and lands in pee, making it look like he wet himself is priceless. It was so lovely to see the realistic uncertainty that teenagers always have along with the cringe worthy antics, we all try to pretend never happened when we were teens. There is no insta love in this book, just real slow progressing two steps forward and one step back romance. Just how it should be written. LGBT readers will love this book just as much as everyone else, because there is no negativity surrounding the growing feelings between Ben and Alex. It's just a heartwarming romance book, which is want the teenagers want.
The book is hilarious. And I mean, aching ribs and unable to breathe hilarious! I was reading a seriously funny scene during a quiet library lesson and I had to bite my hand to stop myself from bursting out with laughter. It's the funniest book I've read in years.
Wonderland is a character in itself. A wistful one, that will have you yearning for you childhood days of traditional British seaside days out. The Mirror Maze, the slot machines and corny exhibitions will bring back fond memories. I strolled back in time and lost myself in the story.
Some of the language and sexual references would make me probably direct the book towards the older teenage market, rather than the younger ones, but it is one I'd definitely put on our LGBT display at school as I know it will be frequently taken out.
I'm now eager to see what Simon James Green writes next. He has such a unique voice that will have the teenagers craving more.
This book is a huge slice of summery nostalgic happiness!