The Missing by Michael Rosen 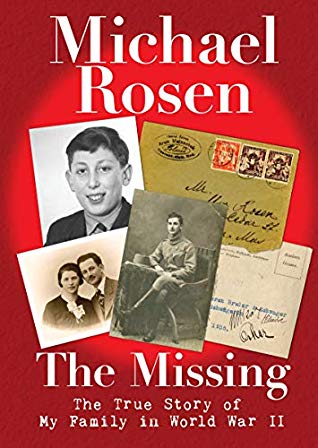 Happy New Year to you all! I hope you are well rested after the Christmas break. I've been really busy reading books for my assignment, which is due in two weeks, so I haven't had as much time recently to read review books. However, I did make time for Michael Rosen's latest non fiction book, The Missing, which was sent to me to review by the publisher.
I'd received a sample a few months back, the day after meeting Dorit Oliver-Wolff, the Holocaust survivor who received the British Empire Medal in the Queen's New Year Honour list this year. Dorit is an amazing woman to listen to, if you ever get the chance. As I walked her to her lecture, she wouldn't let me walk over a piece of bread. She said it was too sacred to walk over it, after spending so much time without food when she was younger. Her speech was extremely emotional.
I knew I wanted to find out more about the Holocaust after talking to her, so when the sample arrived in the post, I read it in straight away. I was so immersed in it, I couldn't wait to read the rest of the book. I wasn't disappointed. In fact, I read the whole book in a couple of hours.
This may be a rather small and compact book, but it is an important one. It's as relevant now as it was during the Holocaust.
Many years ago, Michael Rosen set out to track down his father's six brothers and sisters who had lived in Poland and France during World War II.
It wasn't an easy task and he had to rely on older family members for information which wasn't always forthcoming. It took him a long time to track down information about what happened to them and this book details his journey of discovery.
Interspersed between the chapters, Rosen has included some of his poems, which he is famed for. The one that struck a note with me was the one about the dinosaurs. Even though Rosen only ever heard the story of the Berlin National History Museum, he depicted the scene within his words so visually, I felt I could be standing there myself. All I could think about was a dinosaur still standing, where everything else had been destroyed.
As the book progresses we discover what happened to Rosen's great uncles and just reading it filled me with emotion. I can only imagine how he felt learning of how they passed away. He's included postcards and letters written by his relatives too, which I felt privileged to be allowed to read.
This book validates the existence of Michael Rosen's family members. During the end of the war, many documents detailing the people who were transported to the camps, were destroyed. So many died, without any recognition. Books like these give them a voice, so that their stories can be told and remembered.
This book makes you consider your own family tree and those relatives that have passed. I can understand now why so many people tirelessly try to find out about their family trees. It also brings to light the present refugee situation. How we alienate people by pretending their situation doesn't concern us, when it does.
The book has a superb bibliography at the back, with an extensive list of books that I have added to my TBR list.
If you read one book about the Holocaust, make it this one.