The Hidden Beach by Karen Swan 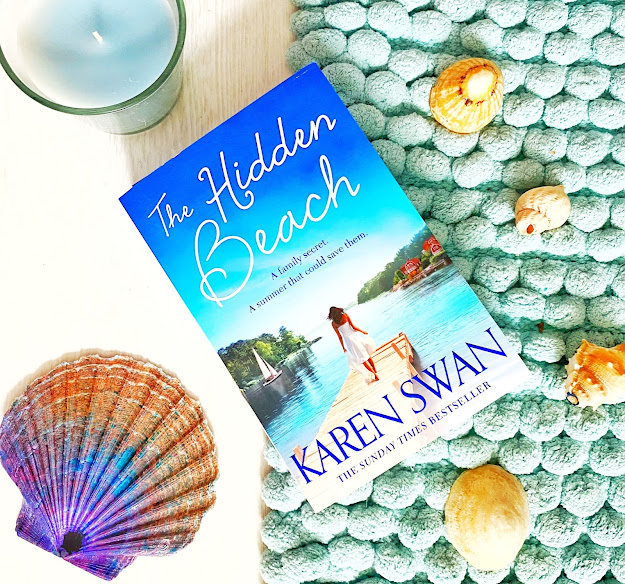 This book was gifted to me from Pan Macmillan via Tandem Collective for the Hidden Beach read along.
Bell works as a nanny to the most perfect family, with the most adorable children  you could find in picturesque city of Stockholm. One morning as she is leaving for the school run, an urgent phone call comes through that shatters the ideal family life for ever. As they relocate for the summer to the small islands of the archipelago, Bell becomes entangled in the lives of the family, bringing up old wounds and creating new ones.
I've seen Karen Swan books on the shelves for quite a few years, but the covers have always put me off. I now realise as the old saying goes - never judge a book by it's cover. The cover of The Hidden Beach  is really deceiving because it screams chick lit, but this book is so much more than that. There are thrills, suspense, tears and explosive page turning turmoils. I don't think I can put into words how thrilling this book actually is. I was only supposed to read a certain amount each day for the read along, but once I started it, I couldn't put it down.  The mystery that evolved by the end was a complete shock to me.
Some of the characters were adorable, others you hated on sight, purely for their selfish attitudes, but you instantly become Team Bell, hoping that everything turns out lovely in the end. Even though I disliked some of them from the beginning, I grew to understand their motives and rash decisions as the book progressed, because the author created real people with heartbreaking decisions.  Hanna and Emil are so wrapped up in their past, they don't see how they are creating huge cracks in their future, as well as that of the children involved. Even though Bell has never had children or worked as a nanny before she was the most sensible person all the way through.
When this book finished, I was bereft. I had the worst book hangover I've had in years and it took nearly a week before I could read anything else. I wanted to read it all over again and feel envy for anyone who is about to start reading it. The group that I read it with, all loved it so much, we are now in the midst of arranging another read along of a different  Karen Swan book. I've already started buying up her back catalogue because with this one book, she has made me a huge fan.  Some are comparing her to Nora Roberts, but I've read very little by that author so I can't really comment on that.
All I can say is give this book a read, because you will be pleasantly surprised and won't surface from it until the end. The perfect summer read!
at July 27, 2020