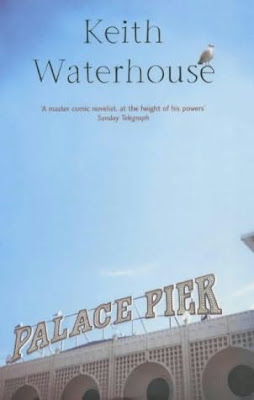 Palace Pier by Keith Waterhouse.
Pages - 201
Challenges - 100+, New Authors, Library and A to Z Title.
I picked this book up from the library, specifically to help me fill in some of the titles in the A to Z titles challenge. I never realised how many books I possess that start with The! Once I read it, I realised I already had a P title. Brain cells start to deteriorate!
I had no preconceptions of this book, as it is not a well known title to me. So I really went into reading this book blind.
This is the story of Chris Duffy, who had a one hit wonder with his book Razzle Dazzle during the 1960's when a vast amount of new writers were being given opportunities to be published. However, that was it for Chris, he was unable to get his second manuscript published and spent the next thirty years calling himself a writer, but never actually writing anything or getting anything published. During those years, he got married, then divorced (he thinks!) and moves from Blackpool to Brighton.
The story begins during the Brighton Literary Festival, where Chris thinks he is eligible to mix with the top authors of the time. He has a plan that he believes will help him return triumphantly to the literary world. His landlady has an unpublished manuscript of a well known literary genius of the 60's, who passed away many years ago. Chris is intent on getting his hands on that manuscript and passing it off as his own. The book follows his funny and pitiful journey to recover the manuscript.
This books is mainly a character driven story. You follow Chris through a journey from personal vanity to self realisation that actually he really is not a very good writer and that his book was not really his story to tell. By the end of the book, Chris realises what he has become; an alcoholic reduced to stealing in order to achieve glory. I believe the moral of this story is that in order to move on with your life, you need to look behind the mask, to reveal who you really are and what you are capable of. Have your dreams, but be realistic as to what you can achieve.
The book is set in Brighton, which I really enjoyed as it is a place I visit frequently. It talks about the famous Brighton Pier, the burnt remains of West Pier and the famous shopping streets, The Lanes.
I found this book an interesting read. I felt sorry for Chris, as his life had really reached rock bottom. He spent his days, drinking from morning to night, sleeping with whichever female gave him any attention. It seemed a very sad existence, but by the end I felt he could actually see his life for what was worth and hoped that he changed his ways. This book is about real life and there is no hype, what you see is what you get.

Keith Waterhouse is a well known author, journalist and creator of TV programmes. In the 60's and 70's he co wrote many famous programmes, such as Budgie, That Was the Week that Was and Worzel Gummidge.
His most famous book was Billy Liar, which was made into a film in 1963 and was nominated for six Baftas. 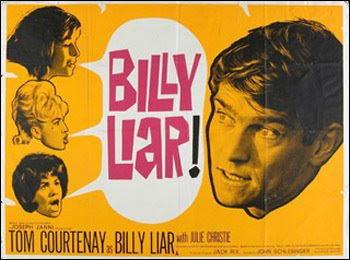 Have you read any books by Keith Waterhouse? Have you ever seen Billy Liar?
Thats all for today, thanks for stopping by.
at March 06, 2009