I have two books that I would really like to read this week.
The Painter From Shanghai by Jennifer Cody Epstein. I found this on Dar's site Peeking Between the Pages and she has a competition on her site to win it too. You will find the competition here.
Here is the synopsis from Waterstones books.

In 1913, an orphan girl boards a steamship bound for Wuhu in South East China. Left in the hands of her soft-hearted but opium-addicted uncle she is delivered to The Hall of Eternal Splendour which, with its painted faces and troubling cries in the night, seems destined to break her spirit. And yet the girl survives and one day hope appears in the unlikely form of a customs inspector, a modest man resistant to the charms of the corrupt world that surrounds him but not to the innocent girl who stands before him. From the crowded rooms of a small-town brothel, heavy with the smoke of opium pipes and the breath of drunken merchants, to the Bohemian hedonism of Paris and the 1930s studios of Shanghai, Jennifer Epstein's first novel, based on a true story, is an exquisite evocation of a fascinating time and place, with a breathtaking heroine at its heart. 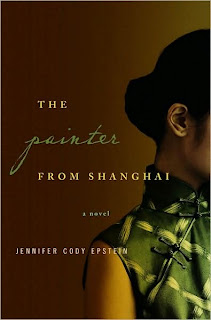 Angels in My Hair by Lorna Byrne was a book I happened to see one of my friends reading. This book really intrigues me as it is the memoirs of a woman who has grown up seeing other people's guardian angels. She was under the impression that everyone could see them. This book is meant to be one of those books that changes your outlook on life.

Here is the synopsis from Waterstones.
Angels In My Hair" is the autobiography of a modern day mystic, an Irish woman with powers of the saints of old. When she was a child, people thought Lorna was 'retarded' because she did not seem to be focusing on the world around her, instead Lorna was seeing angels and spirits. As Lorna tells the story of her life, the reader meets, as she did, the creatures from the spirit worlds who also inhabit our own - mostly angels of an astonishing beauty and variety - including the prophet Elijah and an Archangel - but also the spirits of people who have died. This remarkable document is the testimony of a woman who sees things, beyond the range of our everyday experience. 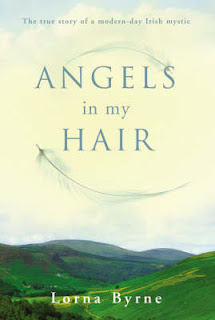 Library Loot is hosted by Eva and Alessandra and you will find them here. 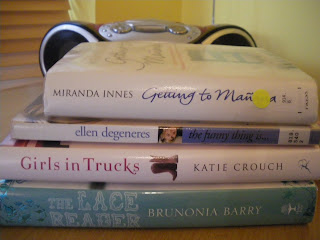 I picked up four books from the library.
Getting to Manana by Miranda Innes - this is the book she wrote before Cinnamon City which I reviewed here. This is about her adventure into buying her Spanish villa.
The Funny Thing is by Ellen Degeneres - I saw this on Rebecca's blog Lost In Books and really wanted to read it. I used to watch Ellen when she had her sitcom years ago. I used love the book shop/ coffee shop she owned. I always found her funny, so I knew I wanted to read this.
Girls in Trucks by Katie Crouch - this has had a lot of airplay in the blogging world and as it is set in the south of America, it will help me with my Southern challenge.
The Lace Reader by Brunonia Barry. I have wanted to read this one since I saw it in January. I just wasn't going to buy it in hardback - far too expensive! I would have waited until the paperback version came out but once I saw it in the library, I just couldn't resist.