Girls In Trucks by Katie Crouch 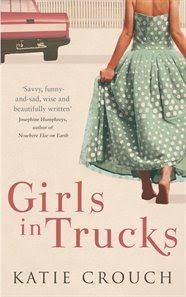 Published in 2008 by Bloomsbury

First line: If you are white, are a girl of boy between the ages of nine and twelve, and according to a certain community of mother, are good enough to associate with Charleston's other good girls and boys, then Wednesday night is a busy night for you.

I think the first thing that attracted me to this book, was the title. It is such a mad title and I was imagining all these beautiful, eloquent ladies dressed with wellies, dragging on a cigarette and jumping into big trucks.

This book was definitely not what I thought it would be about and didn't really fit the description given about it.

This is the story of Sarah Waters, a debutante of the Camellia Society who would spend every Wednesday evening at the dancing school, learning the intricate rules of old fashioned southern gentility and learning dances such as the cha cha. Basically being trained in the fine and dated art of being a lady.

From this information alone, I was under the impression that this was a big part of the story. I imagined the debutante part being the main body of the book. In actual fact, this barely covered a chapter and what the book actually did was follow the lives of Sarah and her three friends through the next twenty years of their lives. The book spent a couple of chapters in the South, with descriptions that were believable and than spent the rest of the time in New York, which, from the descriptions, gave me the impression the author had never actually been there.

I understand that you needed to see the debutante part, as these young ladies were being groomed for a successful marriage, out of which only one achieved this. Sarah's life went in a completely opposite direction, involving an abusive partner, drugs and alcohol, before she found her way home to a Southern gentleman. I really felt that the blurb did not match the story at all. I was really expecting a look at teenagers during their debutante years and I felt a little like I had been misled. Have you felt that before? Have you been misled by the blurb on the book, to find that what you are reading doesn't actually fit with the description?

I enjoyed parts of the story, it was good to see Sarah's progression and for her to finally realise that in fact their is no place like home and that all her past failures were actually leading her on a path to where she started.

The first chapter of the book was strong and you felt like you had a real feel of where the book was going, after that it just went downhill. The first chapter became irrelevant, to the rest of the book discussing Sarah's nasty cousin, who was dead and buried by the end of the first chapter and never mentioned about again. The next few chapters seemed to jump within a time line that was not apparent and it had no real reason to do so. One chapter told the story of a character from the book in third person, as to whom that character is, I really haven't a clue! It took awhile for me to work out what the book was actually about, but eventually I realised that basically it was telling us that life just doesn't always turn out the way we want it to and that no amount of training in etiquette will provide you with a successful marriage and a fulfilled life. You felt that it was saying that the debutante way of life, no longer fitted in with modern society. It was supposed to be funny and heartwarming, unfortunately I found it sad and it left me with a feeling of emptiness.

This book reminded me a little of a film I used to love watching in the early 80's. Does anyone remember the film Shag, with Bridget Fonda and Phoebe Cates, as members of a young group of debutantes who fall onto the wide side for a bit before graduation, well this seems to have been what happened to the girls after graduation. Within the book, only Bitsy marries the way she is supposed to, by marrying a wealthy older man. Although her marriage is not all that it seems and it soon becomes apparent that her husband is not as faithful as he should be.

This book is really about life and realising that it does not always turn out the way you would like it to, but it might eventually just turn out better. An interesting read, which shows you real life and real situations that we all have to overcome at some point in our lives. It was OK, but I don't know if I would rush to read another by this author.

Other reviews on this book