Waiting on Manana by Miranda Innes 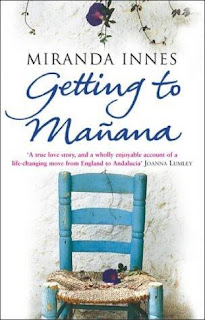 Published by Bantam Press in 2003

You may previously remember me reviewing Cinnamon City which you can find here, which detailed Miranda's decision to buy a riad in Marrakesh, well this book was written before Cinnamon City and details Miranda's move from London to Andalucia.

Miranda and her new partner, the talented artist Dan Pearce, whose beautiful drawings are scattered amongst the pages of the book, decided to sell up their London home in search of a new life abroad. They fell in love with an old ruin and set about restoring it with the help of an abundance of Spanish builders. This book takes you through the trials and tribulations of starting a new life in a foreign country and building a house from scratch whilst actually living in it.

This book is hilarious. I had tears in my eyes whilst reading some of the scenes. Miranda Innes has a talent for comedy and is quick to turn distressing events into a comedy sketch.

Here are a couple of my favourites scenes.

On visiting the house. For a week of the purchase, Dan and I stayed above La Loma, the bar at Almogia, one of the two nearest villages to our finca. It was very hot, and my skirts stuck to my bum - I had to walk backwards, lest people should think I was incontinent.

When discussing their decision to buy the house in Spain. We were like a nightmare soap opera that you cannot switch off - air hostesses, shop assistants and passing dogs, they all got to know about the house in Spain as out came the pictures, the drawings, the documents. We bored everyone but each other. For weeks, close friends had crossed the road rather than encounter our double tsunami of incoherent enthusiasm.

These are just tasters of Miranda's comical writing abilities. Though the comedy is not the only thing that makes this book so fantastic. Miranda writes beautiful descriptions where her words allow yourself to immerse yourself in another world and culture. From descriptions of the landscapes, to a virtual tour of the finca, you can easily imagine the scenes with the vivid descriptions provided. I came away feeling I had actually visited this part of Spain and felt I could envisage it for myself.

Also another plus for this book are the recipes that appear frequently through the chapters. Now being a foodie, recipes within fiction and non fiction books will always win me over and have me scuttling away to my imaginary world, hosting dinner parties, serving the delicious recipes presented in this book, declaring them to be genuine Spanish recipes.

At present, these are the only two non fiction books in this genre that Miranda has written. I am hoping that Miranda may well move into fiction too, as her writing is so entertaining. Her story telling reminds me of Jilly Cooper and Catherine Alliot.

Do go out and read both Cinnamon City and Waiting on Manana, as they are both such fabulous books. You won't regret it.