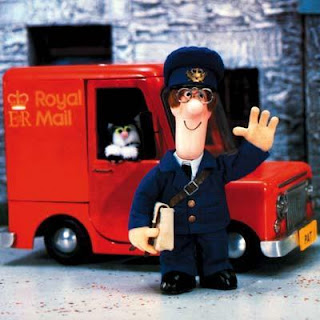 I have been really bad whilst I have been on holiday and I actually came back with 25 books! In my defense, only five of them were brand new and they were priced at £1.99. The rest were from charity shops each at 50p or 3 for £1 and there was a charity shop three doors from where I was staying which had a turnover of about a hundred books a day. So when hubby visited the fishing shop next door, I just had to visit the charity shop.
Here are the five brand new ones I bought. 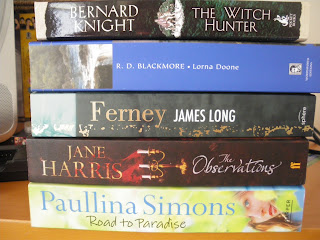 1) The Witch Hunter by Bernard Knight, set in Exeter in the 1100's. There were a selection of these books from the Crowner John mysteries and they all looked good, but this one caught my eye because it was about witches.

2)Lorna Doone by R.D. Blackmore - must have been all that Devon sea air that may me buy this, Exmoor period romance.

3) Ferney by James Long -When Mike and Gally move to a new cottage in Somerset, it’s to make a new start. But the relationship comes under strain when Gally forms an increasingly close attachment to an old countryman, Ferney, who seems to know everything about her.

4) The Observations by Jane Harris. I completely blame Nymeth for this one! She did a Sunday Salon post last month which you can find here, which detailed Victoriana books she coveted. I ended up writing most of the list down in my little book and this was one of them that I managed to find.

5) Road to Paradise by Paullina Simons. When I first got married, I used to read a lot of books by Paullina Simons and they still stick in my head. If you have not read Tully, Red Leaves and Eleven Hours then I would highly recommend them. In recent months, I have been tracking down the ones I haven't read and this is one of them. 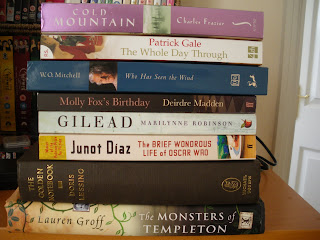 The books above are my charity shop finds.

1) Cold Mountain by Charles Frazier - I have been wanting to read this for awhile since doing the Southern Reading Challenge.
2) The Whole Day Through by Patrick Gale.
3) Who Has Seen The Wind by W.O. Mitchell, a huge bestseller when it was released in Canada and thought to be his best book ever.
4) Molly Fox's Birthday by Deidre Madden
5)Gilead by Marilynne Robinson - I recently read Housekeeping and didn't enjoy it, but everyone told me that I really needed to read this one as it was her best, so when I found it I bought it.
6) The Brief Wondrous Life of Oscar Wao by Junor Diaz - winner of the Pulitzer prize for Fiction in 2008.
7) The Golden Notebook by Doris Lessing - The Golden Notebook is the story of writer Anna Wulf, the four notebooks in which she keeps the record of her life, and her attempt to tie them all together in a fifth, gold-colored notebook. This was published in 1962 and has recently been republished, which I would imagine is in connection with Doris receiving the Pulitzer Prize for Literature in 2007. The copy I purchased is an original hardback from 1962, so I believe it is a first edition. Some times these charity shops have no idea what they are selling!
8) The Monsters of Templeton by Lauren Groff - shortlisted for the Orange Prize for New Writers. On the very morning Willie Upton slinks home to Templeton, New York (after a calamitous affair with her archeology professor), the 50-foot-long body of a monster floats from the depths of the town's lake. This unsettling coincidence sets the stage for one of the most original debut novels since The Time Traveler’s Wife.

So these are some of my books, I haven't shown you all the ones I bought as this post would be even bigger than it is now. I think I am definitely in need of joining Books Anonymous! Anyone know where I can join?
What did you get this week?