Good morning all.
I was going to do this post as a Sunday Salon, but realised as I uploaded the photos that it wouldn't be a post completely about books, so I thought I would show you some of my holiday snaps instead. So be warned, this post is photo heavy!
We spent all last week in a town called Westward Ho! in Devon. The town is named after the book Westward Ho! which was written by Charles Kingsley, who also wrote The Water Babies. I spent my whole week, trying to search out a copy of Westward Ho! only to be told by its residents, 'Good Luck! ' The owners of the publishing rights of the book refuse to have it reprinted, so the only copies available are the original ones and the best place to try would be Ebay! I was gutted. 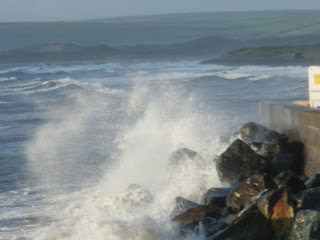 The sea views in Westward Ho! were amazing, I just love to watch the sea when the tide is in and it is hitting the rocks. My girls got soaked every time. We managed to spend one day on the beach, as the weather was pants. The day we spent on the beach, was short lived, as the tide came in really quick. It moved up the beach within fifteen minutes and I have never seen so many people move so fast. It was a little scary! 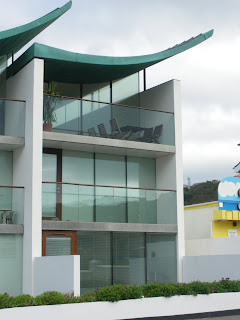 This is where we stayed. It is called The Nautilus apartments and we had the top two floors. The building won architectural awards when it was first built and the roof is meant to represent the waves of the ocean. 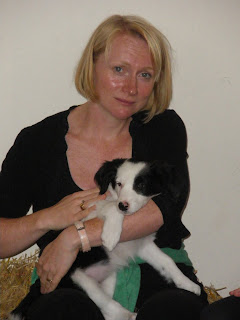 This is me with Roxy, the collie puppy I was very close to bringing home with me. I have never been tempted by puppies, but this one really got under my skin. She was beautiful, but I had to reason that we couldn't have another dog as it looks like we will be getting my father in law's retriever who is as old as our dog Doodahs, so a puppy might be a bit much. 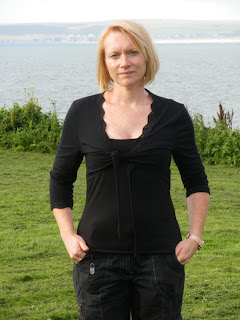 This is me before a long trek up the hill, serious face as I realised I would need to walk for miles to walk off all those yummy pasties and fish and chips! I got to my goal weight the day before we went on holiday and came back five pound heavier, so back to fruit and salad. Ho hum! 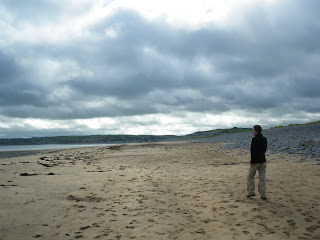 Here is a picture of the lovely sandy beach at Westward Ho! Shame about the clouds. I managed to convince my children to walk to Appledore which is about a four mile round trip. Appledore is holding a book festival at the end of September and there are some great authors attending. I hope to be able to attend next year. 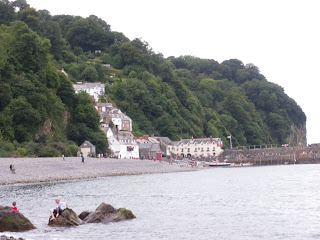 This is Clovelly, a little village that time forgot and preserved for ever. The town has no roads and the people who live there have to carry their belongings up and down the hills by either sledge or donkey. 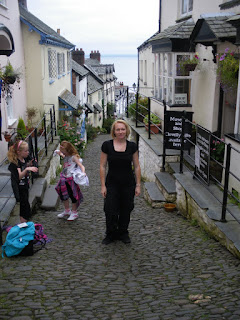 As you can see, the paths are very steep and narrow, but it was like stepping back in time. My photos really don't do it justice. If you ever visit North Devon, then you must visit Clovelly. I want to live here! 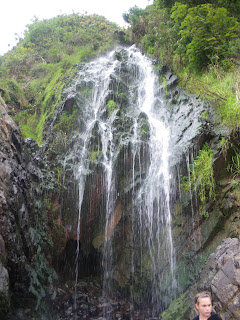 Here is the waterfall at the bottom of the hill, which is famous in folklore. The cave behind the waterfall is believed to the be the last resting place of Merlin. There is a giant rock in front of it, which I didn't get a picture of, which is known as the Giant's Boot and is believed to be where Arthur pulled out the sword from the stone. Not being very knowledgeable about King Arthur, I have no idea whether to believe it or not, but it sounds like a lovely story. 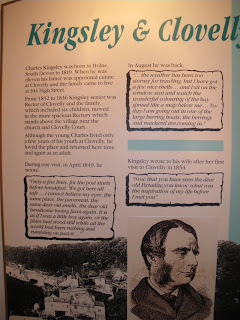 Charles Kingsley, who I mentioned at the beginning of the post, spent some of his childhood living in Clovelly and their is a house in the street dedicated to his memory. He mentioned in some of his letters which are published in the museum, that Clovelly was the place where he got his inspiration from.

We had a fabulous week away, it was nice to just chill out. I spent many an hour watching the sea from our apartment and diving into some fabulous books. The weather was not good, but we didn't let it spoil our trip.
I hope you enjoyed my quick tour of Devon.